Can US 'economic warfare' with Turkey undermine dollar-based monetary rule?

Turkish President Erdogan is increasingly finding support from various countries for his challenge of the dollar’s global authority.

But when Erdogan lashed out against an “economic warfare” against his country amid a battering of the Turkish lira and the US President Donald Trump penalising Turkish exports with exorbitant tariffs, there were some free-market commentators who agreed with him.

“The use of tariffs as a political weapon is a dangerous breach of international norms,”a Washington Post editorial warned on Thursday.

Last week just as Turkey’s Finance Minister Berat Albayrak was announcing measures to stem the slide of the Turkish lira, Trump tweeted he was increasing tariffs on Turkish aluminium and steel.

Trump’s tariffs announcement came after the US administration had already imposed unprecedented sanctions against two Turkish ministers in retaliation for the detention of an American evangelical pastor, Andrew Brunson. The pastor, who had led a protestant church in Turkey’s western province of Izmir, faces terrorism charges.

Mike Pence, US vice-president and a strong supporter of the American evangelical cause, also threatened Turkey with significant sanctions if Ankara does not immediately release Brunson.

Evangelicals make up a significant part of the American voters who will decide if Republicans get to keep their dominance of the congress in upcoming midterm elections in the US.

Though the priest was placed under house arrest by a Turkish court, Turkish courts have not been satisfied with 'evidence' submitted in Brunson’s defence.

Turkey vs US 'economic warfare'

Many Western experts and officials tend to explain Turkey’s financial troubles against the backdrop of its economic problems like high inflation, external corporate debt and current account deficit.

They also refer to Erdogan’s heavy involvement with the country’s economic policy and his alleged “one-man rule,” trivialising the crucial role played by the West’s anti-Erdogan push.

“These economic problems are more of political nature than economic,” said Suleyman Ozdil, the president of the board of Turkey’s Halkbank.

“Geostrategically, it’s insanity” to act the way the Trump administration did, said Benn Steil,a sanctions expert at the Council on Foreign Relations, a prestigious think-tank.

“This was an unprecedented hostile act against a NATO ally, timed to inflict maximum damage,”said Matthew Bryza, a former top US official responsible for Turkish issues at the National Security Council and State Department.

In Turkey, Erdogan has repeatedly been elected since 2002 and has emerged as the leading voice on behalf of Muslims facing problems in countries from Myanmar to Palestine and Germany.

Years ago, at Davos in Switzerland, Erdogan’s famous “One Minute” episode that had to do with Israel’s brutality in Palestine, earned him many admirers not only among Muslims but also from the others who had mostly hesitated to criticise Israel openly.

Erdogan kind of became a spokesman for those who chose to stay silent over Israel’s mistreatment of Palestinians.

Now, in the wake of US “economic warfare,” Erdogan is challenging the American dollar’s global authority.

“We are preparing ourselves to make our trade with countries like China, Russia, Iran, and Ukraine with which we have the most trade volume through our national currency,” Erdogan said last Saturday.

“If European countries also want to get rid of this dollar threat, we are also ready to do the same. We will never accept this system (US-led dollar-based monetary system) which has declared an economic warfare against the whole world and held countries to ransom by threats of sanctions.”

“For the West, Turkey’s current political stances are unbearable. They were accustomed to deal with a Yes-man Turkey,” said Nur Vergin, a Turkish sociologist whose grandfather was one of the closest friends of Mustafa Kemal Ataturk, the secular founder of the Turkish Republic.

“Now, they got a Turkish president who can reject them [if he thinks their offers contradict the country’s long-term interests]. This behaviour is something which can not be tolerated easily by Western leaders,” said Vergin, an informal adviser to Turgut Ozal, a former president who was credited with opening up Turkish markets to the world.

“It is unnerving them,” Vergin told TRT World.

At the end, the standoff between the two allies, the US and Turkey, would make the latter “less in tune with US and European objectives in the Middle East, meaning Turkey would seek to assert a more independent security and defense policy,” wrote Fadi Hakura, an expert on Turkey at Chatham House, a British think-tank.

Indeed, Trump’s divisive and inconsistent policies accompanied by his unpredictable tweeting habits, have already triggered a process of shifting alliances in the Middle East, forcing Turkey to find new allies such as Russia and Iran to end the Syrian conflict and to stabilise Iraq.

Like the “One Minute” episode, Erdogan is increasingly finding more supporters for his dollar argument. The Kremlin, which is the most powerful opponent of the US politics, immediately responded to Erdogan’s call, saying that it’s also planning to use local currencies for trade between the two countries.

Iran, the Middle Eastern powerhouse that has long suffered from US sanctions, also backed Turkey’s stance against the US. Pakistan, one of the most populous Muslim states, also offered its “strong support” to Turkey.

On Wednesday, Turkey’s Gulf ally, gas-rich Qatar’s Emir Sheikh Tamim bin Hamad al Thani, pledged a $15 billion investment in Turkey. "We are together with Turkey and our brothers there, who stand by Qatar and problems of the Ummah," the Qatari leader tweeted, after meeting with Erdogan.

“Maybe, as we see with the fall in lira, Turkey will have some difficulties in the short-term and mid-term. But in the long-term, America will pay a price [for what it has done against an ally],” Ozdil told TRT World.

“Washington's policies will force the whole world to join against it.”

“In both cases, the result will be a less integrated world and diminished American influence.”

In Turkey, Erdogan has also banked on anti-American popular sentiment against the US measures, calling for boycott of the American-made products including iPhones. He has significantly increased tariffs on various American exports including cigarettes, cars and alcoholic products.

“Erdogan’s defiant stance is the only thing he has done in recent years that enjoys virtually unanimous support across Turkey’s political spectrum,” Bryza, a former top US official, observed.

Beyond the rise of anti-American sentiment across the continents, US financial warfare against Turkey could create “ramifications beyond Turkey’s borders.”

Turkey has not only a crucial geopolitical location between Europe and the Middle East but is also tightly integrated into the global economic system.

Many investors have recently heavily invested in emerging markets such as Turkey and when they flee, it could have fallout elsewhere in unexpected ways.

Though many economists and experts downplay possible contagion effects, Tim Lee, a reclusive British economist, warned years ago that a Turkish-based currency crisis could spread to the whole world starting with emerging markets.

“It won’t be a banking crisis this time around — it will be a financial market crisis,” Lee told NYT.

Analysts say that Washington's deviation from its historical role of calming the markets could eventually undermine the global financial system and end up hurting the US the most.

“There is a possibility for a contagion,” said Murat Soycengiz, an economist and a Turkish businessman in Germany. “We mustn’t forget  that the 1929 Depression began with the bankruptcy of an Austrian bank.”

“The effects of this crisis will spread to other places. For example, it will go to Spain [Spaniards own several Turkish banks]. In Italy, it will also have repercussions,” Soycengiz told TRT World.

“European banks will not wish Turkish companies to sink,” said Gokhan Ovenc, an economist and an academic at Istanbul University’s economics department.

Germany, the engine of the European Union, came out strongly in support of Ankara when the lira was taking a hit.

“The present crisis can affect Turkey-EU cooperation positively. As a result, I think our relations with the EU will improve,” Ovenc told TRT World.

“Through the proposed meetings, we could develop our relations in other areas than in the areas where we have already had good relations,” said Kalin.

“We will not lose the economic warfare.” 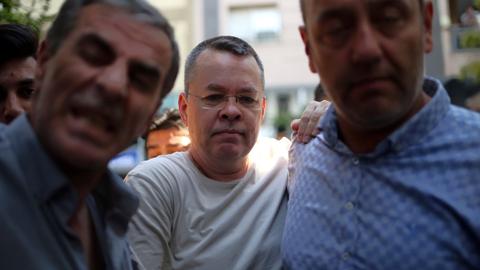