Ever notice birdhouses on Istanbul’s buildings? They carry a lot of history

1
Altered donor kidney blood type offers hope for UK ethnic minorities
2
An Afghan-Dutch chef’s efforts to preserve an old way of life
3
Fisherman in Türkiye bonds with two abandoned pelicans
4
One year on, the Taliban struggles to provide services they used to disrupt
5
A year after Taliban takeover, Afghans wait for a better future

In Istanbul, high up on the sunny facades of mosques and other historical buildings, you may see elaborate houses built for birds if you look carefully enough.

In Turkey, birdhouses are part of the collective past, going as far back as the Ottoman times. During the empire, architects built homes mostly for small birds such as sparrows on the side of mosques and stone buildings that would shelter them from the elements and provide a nesting area.

These birdhouses are generally built on the facades that catch the sun using materials such as wood, stone or ceramics. Some are as simple as holes in the wall for perching, while others are elaborate structures that resemble palaces or mini mosques.

Architect Cengiz Bektas says the birdhouses are made because of the Anatolian folks’ love for birds.

“According to our faith, humankind must be in balance with all creation. I found birdhouses from various centuries. All around Istanbul, there are birdhouses constructed on houses to bridges and mosques,” he adds.

Art historian Hayri Fehmi Yilmaz agrees, noting that since the end of the 16th century, Ottoman architecture has featured spaces for birds, pointing out that the best examples were created in the 18th century, during what is known as the ‘Tulip Period’.

According to Yilmaz, the Ottomans primarily produced birdhouses to house small birds such as  sparrows, swallows and goldfinches, and  not loud and garrulous birds such as pigeons or doves, whose droppings could also cause damage to the buildings.

Yilmaz adds that there are birdhouses in Anatolia as well, in Kayseri, Nevsehir (around the Cappadocia area), and Urfa, to name a few, that are also welcoming to pigeons.

Yilmaz tells TRT World that the primary reason birdhouses were built on building facades is to do a good deed (sevap) to gain favour, so that one helping small creatures in need would be seen in a positive light by God. He points out that featuring birdhouses in architecture would stir up compassion in people, who would exist side by side with smaller beings of creation.

“The Western nations had sculptures and public art prettifying their squares and in front of their buildings,” Yilmaz points out. Because figurative depiction is frowned upon in Islamic art, he says, the birdhouses became a way to bring nature into the cities and create a dynamic movement on building facades, creating a kind of kinetic art full of life.

Yilmaz tells TRT World the most beautiful examples of birdhouses in Istanbul are the Ayazma Mosque and Uskudar Yeni Valide Mosque. He adds that there is also one on the facade of one of the Darphane (royal mint) buildings in the grounds of the Topkapi Palace.

He says that Istanbul has many examples of birdhouses and they are not limited to mosques only but can be found in synagogues and churches dating back to the Ottoman era. In Balat, he says, there is the Ahrida Synagogue, while in Kuzguncuk, there is the Greek Orthodox Church of St Panteleimon.

According to Yilmaz, the birdhouse tradition may have had its roots in Northern Indian architecture from the times of the Mughal (Timurid) Empire, considered to be one of the predecessors of the Turkish Republic, symbolised by one of the 16 stars in the presidential flag.

A company in Corum, a city in the Black Sea region of Turkey, has created modern-day birdhouses for rooftops. Inspired by a European design by Klaas Kuiken, Hitit Terra has produced clay birdhouses for a fraction of the price.

Reached for comment by TRT World, Hitit Terra did not wish to talk about the birdhouses and said they no longer made birdhouse tiles, but that from time to time friends and acquaintances asked the company to produce more. 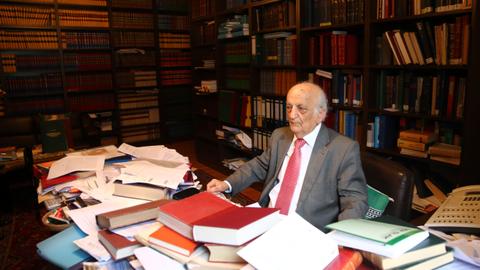 How Fuat Sezgin revived the works of forgotten Islamic-era scientists

1
Altered donor kidney blood type offers hope for UK ethnic minorities
2
An Afghan-Dutch chef’s efforts to preserve an old way of life
3
Fisherman in Türkiye bonds with two abandoned pelicans
4
One year on, the Taliban struggles to provide services they used to disrupt
5
A year after Taliban takeover, Afghans wait for a better future