The activist and author spent ten years off and on in Turkey, mingling with the intelligentsia, working on his manuscripts, and stepping back from the oppressive atmosphere of the United States at the height of the civil rights movement.

In a feature for the New Yorker, Claudia Roth Pierpont writes that Black American author and playwright James Baldwin had met a young Turkish actor, Engin Cezzar in New York, whom he had cast as the lead in a play he had adapted from his own “Giovanni’s Room” for the Actor’s Studio. That was in 1958.

The play did not make a splash, and never made it to Broadway as Baldwin had hoped. The novel Baldwin was labouring over, Another Country was not going anywhere, and Baldwin, according to Roth Pierpont, was in despair because the characters refused to talk to him and the manuscript was “unpublishable.

The Civil Rights Movement was in full steam in the United States during the time Baldwin lived there. Protests and sit-ins inspired by the non-violent teachings of Gandhi took hold, inspired by leaders such as Martin Luther King Jr. Black people in the US fought against discrimination and segregation and the very tangible remnants of years of slavery, translated into incredible difficulties in their everyday lives. While Black people had some allies, there was mainly great resistance to allowing them the same status as white people, and Baldwin was one of the more vocal activists during that time.

It is in such a situation that Baldwin took on a magazine assignment to travel to Israel and Africa. He had been worried because he felt he had arrived at a point “at which many artists lose their minds, or commit suicide, or throw themselves into good works, or try to enter politics.”

So during his travels, he decided to stop by his friend Cezzar’s place, who had told him to come by if he were ever in town. In October 1961, Baldwin showed up on Cezzar’s doorstep in Taksim, Istanbul, just as a party was under way.

Magdalena Zaborowska, the author of James Baldwin’s Turkish Decade: Erotics of Exile, writes that Cezzar told her about Baldwin’s arrival as: “[there] comes this little, bedraggled…hungry, reeking [Jimmy] …a battered suitcase in his hand—into the middle of this party with the whole of the Istanbul intelligentsia—artist, activists, writers […] He was popular and the soul of the party.”

Cezzar and his wife Gulriz Sururi, both actors, took Baldwin in and gave him the spare room in their apartment where he was able to work on his manuscript free from all distraction. Baldwin’s Another Country would be completed in two months after his arrival, and he would find he was welcomed among Istanbul’s artists.

“Surrounded by a colourful cast of Istanbullus, we travel alongside his emotionally tumultuous life as he directs Herbert’s Fortune and Men’s Eyes for the Turkish stage, completes the essay collection No Name in the Street and begins his final work, The Welcome Table,” Anna Ozbek writes in Cornucopia magazine, reviewing Zaborowska’s book.

“Despite his lack of Turkish and frequent references to him as the Arap, Baldwin felt comfortable in the simultaneous celebrity and anonymity Istanbul allowed him, while the clarity afforded by distance allowed him to gain insight into his homeland,” Ozbek continues.

Baldwin eventually moved out of Cezzar and Sururi’s Taksim apartment into a “red wooden yalı, a waterside mansion, once owned by Ahmed Vefik Paşa, an Ottoman-era intellectual and statesman. He also spent time at another multistoried home on the Bosphorus located near the 15th-century stone fortress Rumeli Hisarı, from which Mehmet the Conqueror launched his attack on the Byzantines,” Suzy Hansen writes in Public Books magazine. “In those homes, Baldwin threw all-night parties and gave talks; he entertained Marlon Brando, Alex Haley, Beauford Delaney.”

Hansen also quotes from Baldwin’s biographer David Leeming, who wrote that attendees of his nightly salons also included “students from Robert College, young American teachers, a young Greco-Turkish love of Jimmy’s, Turkish actors and writers,” as well as Americans from the United States Information Agency, whom Hansen insinuates may have been spies.

Baldwin would live off and on in Istanbul for ten years. Hansen says it’s because he felt unencumbered by the restrictions he felt in the United States as a gay man and a black author. “I feel free in Istanbul,” Baldwin told his friend, the Turkish writer Yasar Kemal. “That’s because you’re American,” Kemal replied.

The National Museum of African American History & Culture website notes that Baldwin has exclaimed “Turkey saved my life!” and that “this Turkish decade [he spent mainly in Istanbul] provided a reprieve from America’s homophobia and racism during the height of the civil rights struggles.” Baldwin had reportedly told his friend, assistant and drama critic Zeynep Oral “I can’t breathe, I have to look from the outside.” 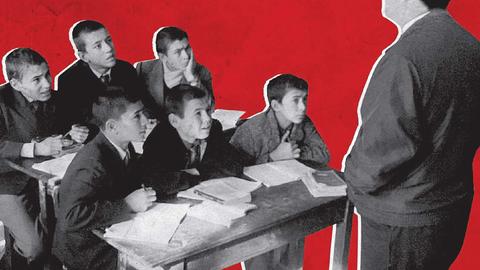 Rockefeller, Ford and the making of modern Turkish-American relations