Meet the Americans who give a voice to silenced Kashmiris

1
Why the Great Gama is counted among the greatest wrestlers of all time
2
Why are sandstorms wreaking havoc across the Middle East
3
UK minorities, women trapped in insecure work for the last 20 years
4
Putin orders a new security system to protect Russian data. Will it work?
5
‘We will heal us’: America marks second death anniversary of George Floyd

While India continues to impose a draconian communication blockade and curfew in most parts of the disputed Jammu and Kashmir region, Americans of Kashmiri origin are raising their voice against New Delhi's aggression.

NEW YORK — The Kashmiri diaspora in the United States has been organising in an unprecedented way following India’s implementation of a draconian curfew and gag on communications in the occupied valley of Kashmir, which began on August 5.

Thousands of Kashmiri-Americans and allies have taken to the streets in the last two weeks to protest the military lockdown and escalation in human rights abuses.

In Dallas, an estimated 400 people braved temperatures of 40C on August 13 to protest at the John F Kennedy Memorial Plaza. The protest was planned and organised by a handful of Kashmiri-American women who are devastated about the atrocities being committed by India. The protest was supported by local groups such as Friends of Kashmir, CAIR-DFW, the Islamic Circle of North America, the American Pakistani Public Affairs Committee, American Muslims for Palestine, and the Indian-American Muslim Council.

Former labour organiser and lawyer, Sehla Ashai, who helped organise and spoke at the event, said: “Our goal in having this protest was not because we think a protest is going to influence decision-makers, especially not in Texas - that is a long road. What we wanted to do was raise our voices and amplify the voices of people in Kashmir so that when the internet came back they would know that even though we couldn’t reach them, we were lifting up their voices and lifting up their cause.”

She also added that there was a lot of misunderstanding by the media and the public at large about the issues at stake.

“This is not the unfinished business of accession. This is the continuation of a people’s movement that started in 1931. That is really the Kashmiri perspective. Those of us from Kashmir remember that, but that has been written out of the narrative in Kashmir. Article 370 didn’t protect us from 700,000 troops. Article 370 didn’t protect us from the army expropriating land. So, the issue is not article 370, it’s occupation.”

In New York, around 400 protesters gathered outside the Consulate General of India on the evening of August 5, where a party was taking place. People called for “Azaadi” (Freedom) and chanted: “From Kashmir to Palestine, occupation is a crime.” The protest was organised by the grassroots activist movement #StandWithKashmir which has provided a platform for galvanising diasporic communities into action. Representatives from around a dozen solidarity groups such as Syria Solidarity NYC, Jewish Voice for Peace, and Palestinian Youth Movement also attended.

Hafsa Kanjwal, an assistant professor in South Asian history and a #StandWithKashmir volunteer said: “We have never been able to mobilise on such a level, and with such a diverse set of actors.

“I’ve been hoping for solidarity on Kashmir for a really long time and it’s just never been able to mobilise. For me it’s unfortunate to happen in the context of such drastic things happening in Kashmir.

“It made us realise that there is support and energy for Kashmir but there needs to be a lot of work done. It has to be more long-term than short-term protests.

“We are not looking for a restoration of the status quo. We are looking for a final solution – an end to the occupation and an implementation of a referendum.”

Education professional Natasha Mir, who attended the protest with her family, said: “It was great to see a mixture of Kashmiris and non-Kashmiris. The solidarity is important. There were a large amount of people who identify as Indian and to hear them speak up against Hindu nationalism and for the people of Kashmir meant a lot to myself and my family that was here today.

“I hope the powers that be inside the Consulate General’s office are watching and listening and realise that if this is for the people of Kashmir, why don’t they know, and why were they not involved in the decision? There would be no need for a massive crackdown and communications shutdown if this was in their best interests.”

In the meantime, panic and fear about the safety and wellbeing of loved ones has been escalating given it is now more than two weeks since the draconian communication gag was implemented – particularly in light of reports that Indian soldiers are committing human rights abuses.

Architect Sanna Shah witnessed the beginning of the communications blackout while attending her cousin’s wedding in Kashmir. She recalled: “When we all got home on Sunday, our internet and phones went at around 11pm. After communications were cut, I was sad I wouldn’t get a chance to say goodbye to all my relatives. I still didn’t know what was going on.

“When we woke on Monday morning, there was barbed wire everywhere and makeshift barriers of small boulders. When we tried to leave our house, there were six military officers 600 feet outside our house. There were checkpoints every 900 feet or so,” Shah explained.

“At every checkpoint we saw locals begging to be let through and being roughed up by security forces. I saw a guy on a motorcycle being beaten with a baton. Locals were out on the streets because they didn’t know a curfew had been imposed, or why. It was a sneak attack.”

Shah was only able to get through the checkpoints because she was a visitor and had an air ticket for that day.

One woman – who did not wish to be named in case her family suffers repercussions - is worried about her extremely ill 85-year-old father. Sobbing on the phone, she said: “I’ve been told there are police stations that will give you information. This is not true. I call every day and I get through to automatic voicemails.

“I’m not able to talk to my dad and see how’s he doing. He cannot walk and is in a wheelchair. He has diabetes, high blood pressure and problems with his thyroid. He needs so much medical attention. I am worried whether he is alive or not because I haven’t heard from him. This has been the first Eid where I have not been able to speak to my family. My mum passed away 18 years ago. My dad is everything to me.”

Another woman, who did not want to be named for the same reasons, said: “I recently got married and have been in a long-distance relationship due to work commitments. My husband and I usually speak to each other every day. Since the siege started, I have not heard from him. I spend almost 20 hours a day glued to my phone, waiting for a call or message, or hitting refresh to see if there is an update on the situation.”

She had also called many of the Indian army-controlled phone booths with no success. She added: “I’ve heard that many of these phone booths have four to five hour waiting times and it can be a humiliating experience for people waiting to use the phones as the army personnel can be unnecessarily difficult. I don’t want to put my husband through that.

“This was meant to be my first Eid with my new family. On Eid, many of us thought that the Indian government would allow families to reconnect. That hope proved false. It’s moments like this when you feel completely broken.”

Kanjwal said that #StandWithKashmir hoped to “continue mobilising and building off the current momentum”. However, the fact that people have not been able to get in touch with loved ones remains a “grave concern”.

Syma Mohammed is a journalist who loves writing about arts and culture, gender issues and all things food-related. 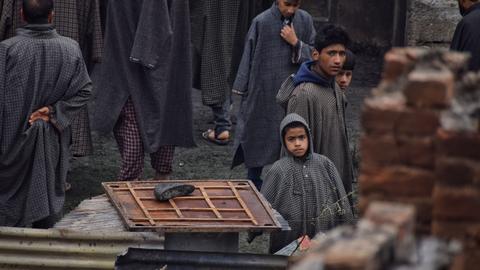 Why Indian forces are setting houses on fire in disputed Kashmir

1
Why the Great Gama is counted among the greatest wrestlers of all time
2
Why are sandstorms wreaking havoc across the Middle East
3
UK minorities, women trapped in insecure work for the last 20 years
4
Putin orders a new security system to protect Russian data. Will it work?
5
‘We will heal us’: America marks second death anniversary of George Floyd