The role of women in the Algerian independence movement

Algerian women bravely waged a battle against colonialism and patriarchy. Today, their legacy continues to inspire a new generation in the struggle for justice.

On a late September afternoon in 1956, a young woman entered an Algiers cafe popular with European youth. She appeared like an ordinary French-Algerian, but in reality she was a revolutionary Algerian Muslim: Zohra Drif.

Drif would be one of three Algerian women involved in a series of terror attacks at the height of the guerilla insurgency against French occupation.

That campaign was later popularised by Gillo Pontecorvo’s iconic 1966 film The Battle of Algiers, which dramatised Algeria’s independence struggle (1954-1962).

In an act of revolutionary masquerade, the film depicted how women subverted the colonial lens of gender: using their veils to hide messages, money and weapons, and donning western dress as they entered the French quarters and deposited explosives.

Although they received only 15 of 121 total minutes of screen time, the impact that Algerian women had during this period cannot be denied, and their participation in the liberation movement was a major event in Algeria’s march to independence.

“Women had every interest in participating in the struggle for liberation,” says Wiame Awres, an Algerian botanist, pharmacist and filmmaker.

“Women, like men, dreamed of an independent Algeria which they would build together,” she tells TRT World.

As agents capable of organising and executing violent acts, women demonstrated resistance to both colonialism and patriarchy. Not only did they transform Algerian society, they also helped transform global opinion towards the revolution.

During the 132-year long occupation of Algeria, French colonialists weaponised Algerian women’s bodies as part of a political battlefield between French and Algerian men.

The rape of Algerian women by French soldiers was used to demoralise Algerian men, whom they considered to be sources of ‘honour’. As a result, according to Zahia Salhi, the bodies of women became “political signs, territories on which the political programmes of the rioting communities of men were inscribed.”

The consequences were borne by women, who, as Awres highlighted, suffered both colonial and patriarchal discrimination.

“Women had very precarious jobs, took care of the housework and had very little access to education,” she said. Amid increased veiling and domestic seclusion, women became viewed as the custodians of traditional values by Algerian men as means of exerting control in the face of colonial repression.

Martinique psychiatrist and anti-colonial thinker Frantz Fanon noted this in his book A Dying Colonialism, where he stated: “To convert the woman, to win her to foreign values, to rescue here from her status, is both a means to have full control on the man and to have the practical and efficient means to demolish Algerian culture.”

The traditional North African haik (veil) became a potent symbol to be targeted, leading Fanon to describe the veil as a resistance to French colonialism.

However, the reactionary counter narrative that emerged only further invisiblised Algerian women, forcing them into a rigid binary and thwarting any access to subjectivity and recognition of rights. The ‘women’s question’ was thought to be a distraction from the primary objective of fighting colonialism.

The massive popular demonstrations on May 8, 1945 – and the tragic massacres that ensued – was the first time in modern Algerian history that women from all ranks took part and thrust them to the forefront of nationalist consciousness.

Algerian historian Benjamin Stora accounts for this transition to action, saying that Algerian women joined the struggle for independence in an attempt to “invert their positions as victims” by fighting for self-determination of their country and their autonomy – both of which had been denied to them during colonial rule.

Driven by the resolve of liberation, women emerged out of the shadows to take on new roles as war heroines following the outbreak of armed struggle in 1954.

The most dynamic phases of women’s direct engagement in the war came from 1955-57. During this period, many thousands of women participated as paramilitary fighters, nurses, cooks, fundraisers, and provided logistic support to the National Liberation Army (ALN) – the combat branch of the National Liberation Front (FLN), the party of the nationalist movement.

One of the enduring images of women in the war were the Fedayeen, the middle class urban-based militants, and the Moudjahiddine (freedom fighters) rural command of the ALN. Of the first 1,010 Moudjahiddines, 49 were women. By the end of the revolution, that number amounted to 10,949.

“The majority of support to the FLN came from the rural peasantry, who were an indispensable part of the revolution’s success,” Fatima Mansouri, an Algerian-French feminist and community organiser, tells TRT World.

“They were vital in trafficking information and arms, providing food, washing, collecting medicine and ammunition, and even did secretarial work.”

In the urban centres, the role of the Fedayeen was to ensure liaison between various factions of the ALN/FLN. They would cleverly mask their activities by using the veil to smuggle arms and cash, and facilitate the movements of the Moudjahiddine. Conversely, they wore western attire to slip past checkpoints and discreetly plant explosives in French neighbourhoods.

Renowned for their bravery, “these women captured the people’s collective imagination, not only at home but globally,” Mansouri said.

One of the most famous Algerian female revolutionaries is Bouhired. At the age of 20, she joined the FLN and later took part in guerrilla warfare as part of the Fedayeen. After she was arrested in 1957, Bouhired was beaten, burnt and electrocuted at Rheims prison. Campaigns demanding her release gained traction worldwide.

Personalities across the region honoured her: Lebanese musician Fairuz dedicated a song to her, Syrian writer Nizar Qabbani penned a poem about her, and Egyptian filmmaker Youssef Chahine directed the 1958 film Jamila, the Algerian about her life.

Militant and author Louisette Ighilahriz was another prominent revolutionary, who worked as a courier for the FLN. She documented her incarceration in her memoir, Algerienne. In it, Ighilahriz testifies to women’s active engagement in the war and the gruesome accounts of torture committed by French forces.

Another is Zohra Drif, the famous Milk bar bomber and staunch feminist who killed and maimed on behalf of the FLN, recounted the war in her memoir Inside the Battle of Algiers and her role in the struggle.

After independence, Drif continued her political engagement as a lawyer and tenure in the Algerian senate.

Despite their significant role in the anti-colonial struggle, Algerian women were largely left in the lurch in the aftermath of the revolution and independence, as the ruling FLN regime consolidated its power across every institution.

“After independence, those who took power betrayed the women’s struggle and formed a conservative state, establishing the family code and placing women as second-class citizens,” Awres said.

She pointed to how within three years of independence, women gathered to resist the regime during the international women’s day demonstration of March 8, 1965. And they have not ceased to challenge religious oppression, economic exploitation and social marginalisation since.

In recent years, there has been a revival in interest in the history of the Algerian women’s movement from colonial to post-colonial eras.

Discussing it with TRT World, Haouati and Gacem describe the project as a citizen-led and participative project that aims to digitise archival documents related to Algerian women’s movements, specifically tracing the mobilisation of women during different periods post-1962.

Initially, they focused on collecting a range of archives since the end of the 1980s and of associations of women and feminists still unknown today.

Both critical and educational, they envision the project as a way of participating “in the reconstruction of a link between the struggles of the past and those of the present.”

Haouati and Gacem believe that in the current political context in Algeria, that bringing an archive to life is “a political act”. By doing so, they hope to make visible the work of women and feminist collectives who have otherwise been forgotten.

“Such a gesture contributes to our sense of reappropriation during a falsified, confiscated past. It’s a question of saying: ‘We know our history, its actors and its actresses’.”

Indeed, the historical memory and legacy of those female freedom fighters continues to find expression in contemporary Algeria.

Bouhired, Ighilahriz and Drif still remain publicly active, as the struggles they waged decades ago continue to this day. They have inspired successive generations of women to fight against a system built to silence them.

The spirit of these women, who sacrificed so much for their country’s freedom, have kept the fire of liberation alive in Algeria’s collective memory.

It’s a sentiment that Awres shares.

“The mujahideen are our source of strength and inspiration,” Awres affirms. “They show us when our rights are being wrested away, that change is only the result of a bitter struggle.”

The scars of history, after all, still run deep.

“Colonisation has left traces and traumas which are used against us to try and silence us.”

Awres’ rejoinder, however, is fitting one: “To be silent is not an option.” 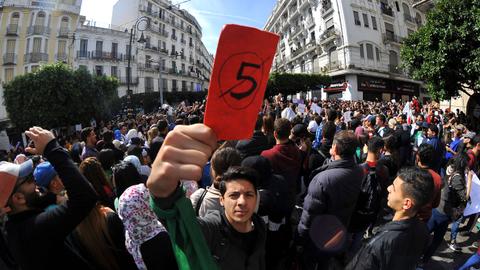 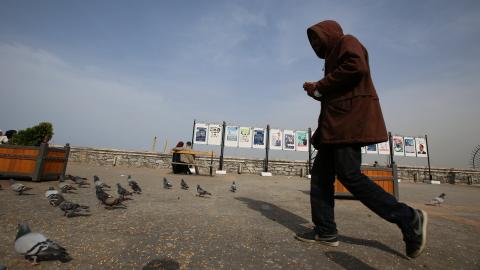