Failing economy, growing insurgency and low returns from food crops have left tens of thousands of Afghan farmers with no other choice but to return to poppy cultivation after a gap of 13 years.

John Nicholson, the top commander of the US Army in Afghanistan, recently announced that American forces, along with the Afghan military, are bombing what he called "Taliban drug labs" to weaken the economy of the insurgent group.

"We are hitting the Taliban where it hurts, which is their finances," Nicholson told reporters in Kabul.

He also estimated that the Taliban earned about $200 million per year from opium production, a plant used to produce harmful narcotics such as heroin.

As ambitious as Nicholson’s plans sound, the ground reality is more complex than ever.

A fresh report by the Special Inspector General for Afghanistan Reconstruction (SIGAR) released on January 31, expressed an equally dismal view of the United States’ counter-narcotics efforts in the country. “Despite a US investment of $8.7 billion to counter Afghanistan’s illicit narcotics economy, [it] remains the world’s largest opium producer and exporter, producing an estimated 80 percent of the world’s opium,” the report observed.

But at the same time, the US military's adventure against the opium dealers can put thousands of struggling farmers at risk.

“Those labs are not what people—at least we in the West—imagine them to be; clean labs in separate buildings. They are also not 'manned' by the Taliban fighters,” Thomas Ruttig, co-director of the Afghanistan Analysts Network (AAN), told TRT World.

“These are low-tech hubs, run by local people, i.e. the civilians. So such attacks will likely hit the wrong people, those at the bottom of the 'food chain', adding to the civilian casualties.”

After a gap of 13 years, Elham has now returned to growing poppy seeds on his field in one of the insurgency-hit districts in the north of Afghanistan, an audacious risk amidst the US' stringent military measures against the Taliban's economic backbone.

“I don’t have any other options,” he insisted. “I had to start growing opium in my fields again. This is the only way I can make enough money to sustain my family in these uncertain times,” Elham, whose name has been changed to protect his identity, told TRT World.

This year saw a massive opium harvest of nearly 9,000 metric tonnes—a significant increase of 87 percent from the previous year, according to the latest figures released by the UN Office on Drugs and Crime (UNODC). The regions that previously recorded a decline in production have experienced a reversal with newer regions, especially in the north, being added to the “opium belt”.

Farmers like Elham are at the bottom of the supply chain, who have contributed to the significant rise of opium production recorded since the early 1990’s.

“It isn’t illegal,” Elham argued. “We have seen our neighbouring farms grow it. It can’t be illegal if we are all growing it,” he reasoned.

At first, Elham stated that opium wasn't entirely damaging to human health. “We are not directly producing anything that is harmful,” he tried to explain. “What we grow is taken abroad and turned to drugs that cause illness and addiction. But some of if it is also used for medicinal purposes,” he said.

And yet, as the conversation progressed, Elham revealed the nature of the business. “We are not afraid of the local police. They, along with the local army commanders, know what we grow and they support us,” he said. Of course, the support comes at a price—a 10 percent commission. “If you pay, there is no pressure. It is all about money,” he added.

Elham’s words resonated with the changing dynamics of this illegal Afghan economy. "Too many representatives in the Afghan government are profiting from the narcotics trade, mainly from protecting the trafficking,” explained Ruttig.

“It has long been known that administrative, police and other official posts along trafficking routes are so lucrative that they are bought, with the hope of this 'investment' becoming even more profitable,” he added, referring to the corrupt practice of “selling” lucrative border patrolling jobs to the highest bidder.

“There was never a willingness to seriously approach this issue, not by donors, nor by the Afghan government,” Ruttig said.

But things weren’t always this grim, and some progress was made, following the fall of the Taliban regime after the US occupation in 2001. A significant number of farmers had moved away from cultivating opium to other alternatives, mostly wheat. The years between 2009 and 2015 showed a remarkable decrease in production, ranging from 22 percent to as high as 50 percent.

However, a combination of events involving the US withdrawal of troops, a rise in the insurgency and the entry of new insurgent groups, such as Daesh in Afghanistan, have contributed to an unstable economy, pushing farmers to take desperate measures.

“It [opium] not only pays better, but it requires lesser investments,” Elham reasoned, adding that they haven’t stopped growing vegetables and wheat, but reduced their production of food crops to accommodate opium crops. “We grow wheat and opium in different seasons, and in between we also grow vegetables,” he said.

Jelena Bjelica, a researcher at AAN further elaborated the lucrative economics of opium production in her report titled A Low-Risk Crop in a High-Risk Environment. “Even during wartime, the market for opium still functions,” she noted. “Farmers who grow legal crops [during conflict] have to get them to market, risking their year’s income travelling through front lines and checkpoints. If they grow opium, the buyers come to them. It is a lot safer,” she explained. Additionally, opium can also be dried and stored for up to seven years and still retain its value, making it a viable savings option.

This attractive income is not deterred by fear of the law, or the implications behind supporting an insurgency. Elham defended his point by saying, “I don’t grow opium for the benefit of the Taliban. I grow it for the benefit of my family.”

Despite his denial, and that of the Taliban, the country’s opium production has reportedly been the group’s primary source of income. Contrary to the popular belief that the Taliban cracked down on opium farmers during its regime in the late 1990s, it not only encouraged opium farming but also admitted that it could not “reduce cultivation without donor assistance”.

And this is perhaps why, targeting “Taliban drug labs” plays a very crucial role in the US’s latest strategy for Afghanistan.

Though the US military intends to target what it calls Taliban drug labs, only a small percentage of the opium produced in Afghanistan is processed into drugs within the country.

While a recent report by the New York Times suggested that the processing units in Afghanistan had increased, even by the most generous estimate, it still only caters to half of the entire harvest. US forces estimate that there are about 400 to 500 facilities that process the drugs, but most of the opium sap is still smuggled out of the country to be turned into marketable narcotics.

According to the data gathered by SIGAR, 25 drug labs had been destroyed between November and December 2017, equalling nearly $80 million of drug money being eliminated, and $16 million of direct revenue denied to the Taliban.

Farmers like Elham believe that the US has no intentions of targeting the farming community. “We have no option,” Elham reiterated. But according to the US government’s latest reports, there are more than three million drug users in Afghanistan, nearly 10 percent of the country’s entire population.

“They [smugglers] take it abroad, extract the useful parts and send the bad parts back to Afghanistan. It’s the government’s job to control the borders and make sure the harmful drugs don’t come back into the country.”

Ruchi Kumar is an Indian journalist based between Mumbai and Kabul focusing on political and cultural stories from the region. 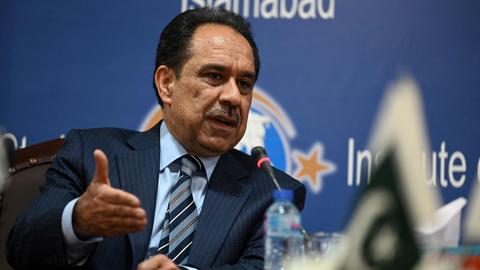