Will Iraq buckle and give Iran-backed militias a free run?

As pro-Iranian militias lay a siege around Baghdad's high-security zone, where top offices and embassies are located, experts see it as yet another test for the Iraqi government to restore its compromised sovereignty.

Iran-backed militias have adopted arm-twisting tactics against the Iraqi government after one of its top commanders Qasem Musleh was arrested on May 26.

In the past two days, hordes of Shiite militias have arrived in Baghdad and encircled the capital city's high-security area called the Green Zone, where foreign embassies, diplomatic missions and the government's top headquarters are located.

The arrest of Hashd al Shaabi commander Qasem Musleh came on the heels of a prominent social activist Ihab Jawad Al-Wazni's assassination in the city of Karbala on May 9.

According to regional experts, the will of Iran-backed militias have largely prevailed over the Iraqi government ever since the US withdrawal from the country began in 2007, and it's now become increasingly hard for the government to rein in these armed groups.

“The recurrence of these incidents (the siege of Green Zone) tells us of the rise in the power of militias and the decline in the strength of the government and its security forces,” Watheq Alsadoon, an expert on Iraq at the Center for Middle Eastern Studies(ORSAM) in Ankara, told TRT World.

The current face-off between the two sides have raised the spectre of full-blown violent confrontation. In June 2020, the Popular Mobilization Forces (PMF), an umbrella organisation of over 40 Shiite armed groups, threatened the Iraqi government with a missile strike on a diplomatic mission in Baghdad. The strike did not happen, but the threat in itself became a strong indicator of how weak and helpless the Iraqi government was in the face of Iran-backed militias.

Alsadoon, however, ruled out the possibility of a violent clash between the government and militias, saying there is "no real and clear will on the part of the government to stand up to the militias".

"And we always find that the government retreats at the last moment from its firm steps against militias,” he added.

As hundreds of heavily armed PMF, also known as Hashd al Shabi, laid siege around the Green Zone, Prime Minister Mustafa al Kadhimi condemned what many see as a show of strength. Prime Minister Kadhimi called it a “serious violation of the Iraqi constitution and the laws in force”.

“We have directed an immediate investigation into these movements,” the prime minister added.

According to Alsadoon, Prime Minister Kadhimi's remarks suggest that the government wants to restore its "prestige, security and sovereignty on the Iraqi streets", and this sort of posturing may lead to a major confrontation, a decisive moment that is "not foreseen in the near term so far".

Musleh, the militia commander who was detained on Wednesday, is the head of the PMF in Anbar province. The PMF is the largest militia in the country, formed to defeat Daesh in 2014. It consists of several splinter groups full of Shiite fighters who are backed by Iran.

Musleh was being questioned by a joint investigative committee from the Joint Co-operation Command, Interior Ministry and Military Intelligence Services, National Security and PM Security Department.

"The operation does not target any military or security party, as rumours from the promoters of sedition, and that all military and security services are under the command of the Commander-in-Chief of the Armed Forces," the country’s Security Media Cell said in a statement.

Musleh is the head of the Popular Mobilization Forces in Anbar province. The PMF is a state-sanctioned group comprised of an array of militias formed to defeat Daesh in 2014. Among the most powerful members of the group are Iran-backed Shiite militia groups.

Iraqi security forces and the elite Counter-Terrorism Service were moved to protect the government institutions and diplomatic missions from the looming threat of militias.

Musleh is accused of corruption and complicity in the assassinations of Iraqi activists in the southern city of Karbala, four officials told AP on the condition of anonymity.

Since 2019, nearly 30 Iraqi activists, all of them seeking reform and no Iranian interference in the country’s internal affairs, have been shot dead by unknown gunmen. Several dozen reformists have been abducted, too.

The most recent assassination of Ihab Jawad Al-Wazni triggered protests against the PMF militias. Although no group claimed responsibility for the killing, protesters and local experts point at Iran and its militias for being behind all the assassinations.

Protesters gathered outside the Iranian Consulate in Karbala after Wazni’s assassination on May 9 to condemn Iran’s role in aiding and abetting these militias.

In 2019, similar protests erupted and protesters made some attempts to burn down Iranian consulates both in Najaf and Karbala, the holy cities for Shias in Iraq.

"We charged him with the murder of my brother Ihab. My mother filed a lawsuit against him. We are sure that he was the mastermind of my brother's assassination," Marwan al-Wazni told MEE.

Mother of slain Karbala activist Ehab al-Wazni says that PMF commander Qasim Musleh had threatened her son directly. “Musleh once told my son, if there is only one day left in my life, I will use it to kill you," she said. https://t.co/TnLK60SiiL

Although Prime Minister Kadhimi has repeatedly promised  to punish the perpetrators of the activists' assassinations, no one has been brought to justice thus far.

This time, however, the government arrested Musleh and launched a probe into Ihlab's assassination, earning the praise of foreign governments. The UK welcomed the investigation against Musleh and his groups, saying: "“Any arrest case should run its course, as goes for any Iraqi”.

Any arrest case should run its course, as goes for any Iraqi. And surely, nobody should resort to a show of force to get their way. Such behaviour weakens the Iraqi state and further erodes public trust. State institutions must be respected at all times. Nobody is above the law.

But social media was abuzz with rumours of Musleh's release on Friday.

Faleh Al-Khazali, an Iraqi parliamentarian from the Al-Fateh Alliance (which includes the majority of the Popular Mobilization factions), announced via Twitter, "The release of the Anbar Operations Commander, Qasem Musleh, and his receipt by the Hashd Security, and the legal contexts must be respected."

The Iraqi government is yet to make any clarification on the matter, however. 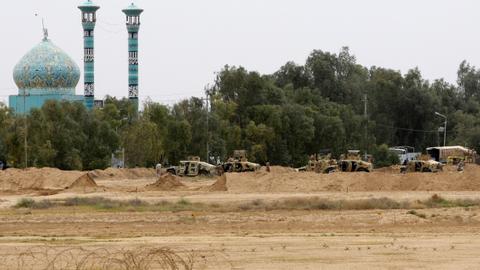 Did Israel open a new front against Iran by attacking Iraq?