Children in Yemen are most at risk, suffering and dying from acute malnutrition as they end up internally displaced and unable to continue their studies.

The Yemen War is about to enter its sixth year in March 2020 and shows no signs of abating. The civil war continues between the Yemeni government led by Abdrabbuh Mansur Hadi and the Houthi militants backed by Iran.

Children have suffered the most in the war - and according to UNICEF Regional Director for the Middle East and North Africa, Geert Cappelaere, the conflict is a “living hell” for children.

A recent UNICEF report notes that Yemen is “the largest humanitarian crisis in the world” with more than 24 million people – some 80 per cent of the population – in need of humanitarian assistance, including more than 12 million children.

In addition to being killed and maimed in the war, children, UNICEF reports, suffer from acute malnutrition, and lack access to education. Children suffering from severe acute malnutrition number around 368,000 while two million children were out of school at the beginning of the school year in September 2019 - including almost half a million who had dropped out since the war began.

Moreover, UNICEF adds, “the damage and closure of schools and hospitals has disrupted access to education and health services, leaving children even more vulnerable and robbing them of their futures.”

UK charity War Child quotes the UN as saying “more than two million children [in Yemen] are malnourished, with one in two now suffering from stunted growth because of food shortages.”

According to humanitarian organisation World Food Programme (WFP) in a December 2019 brief, at least 50 percent of the population is estimated to be living in poverty, and more than 90 percent of food in Yemen is imported, exposing the nation to food shortages when ports are not accessible or food is unaffordable due to exchange rates and price fluctuations.

WFP says 20.1 million Yemenis, 70 percent of the population, face hunger without food assistance programmes and that 14.4 million people need immediate assistance to sustain or save their lives.

According to Oxfam, people in Yemen suffering from food insecurity and malnutrition include two million children. 10 million people in Yemen are “just one step away” from famine.

While discussing food assistance programs in Yemen in a December 2019 press release, WFP says the most vulnerable group is children. WFP justifies food assistance provided to Yemeni children, noting “This is the generation that Yemen will rely on to rebuild when the devastating conflict comes to an end. It is essential that they are able to realise their full potential.”

In a February 2020 fact sheet, USAID predicts a worsening food security situation in Yemen in the coming months, “as foreign currency shortages and a northern de facto authority ban on new, Republic of Yemen Government (RoYG)-issued banknotes are anticipated to increase food and fuel prices and disrupt imports.” This situation is likely to negatively affect many Yemenis including children. 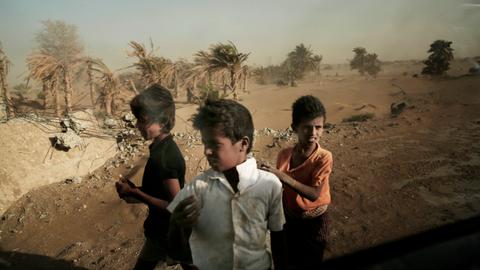