Turkey summons US envoy over conditional condemnation of PKK massacre

US response to the massacre of 13 Turkish citizens by PKK in Iraq has been widely slammed by Ankara as conditional and a "joke" as authorities cracked down on suspects, arresting more than 700, including local heads of HDP party.

Turkey has summoned the US ambassador to Ankara to convey "in the strongest terms" its reaction to a statement by Washington on the massacre of 13 Turkish citizens by the PKK terror group.

"Today, US Ambassador David Satterfield was summoned to our ministry, and our reaction to the statement by the US was voiced in the strongest terms," said the Turkish Foreign Ministry on Monday.

The US State Department had issued a conditional condemnation on Sunday over the execution of 13 Turkish citizens by the PKK terror group in northern Iraq's Gara region.

"If reports of the death of Turkish civilians at the hands of the PKK, a designated terrorist organisation, are confirmed, we condemn this action in the strongest possible terms," the department said.

"We stand with our NATO Ally Turkey and extend our condolences to the families of those lost in the recent fighting," it added.

During Monday's meeting with Turkish officials, Satterfield expressed his condolences "for our personnel and 13 citizens who were martyred by the PKK terrorist organisation," Turkish Defence Ministry said in a statement.

"Satterfield confirmed that they [US] hold the PKK terrorist organisation responsible for the massacre in Gara," the statement said.

The victims were discovered in the Gara region, near the Turkish border, during an operation against the PKK that had aimed to free the hostages. Twelve of the victims were shot in the head and one died of a shoulder bullet wound. The 13 were kidnapped inside Turkey in 2015 and 2016.

US statement about the massacred 13 Turkish citizens in Gara puts into question the reporting of the incident, TRT World's Editor-at-large Yusuf Erim has more pic.twitter.com/Puu4DrYxg8

US statement is 'a joke'

Turkish President Recep Tayyip Erdogan on Monday called the US statement "a joke".

"Were you not supposed to stand against the PKK, the YPG? You clearly support them and stand behind them," he said.

The PKK is designated as a terror group by Turkey, the EU, and the US.

YPG, the Syrian wing of the PKK, is, however, a US ally against Daesh in Syria and has seen support amongst the officials of the Biden administration. Support for the YPG in Syria is seen as a divisive topic between the two NATO allies.

Over 40,000 people, including children, have been killed in PKK operations in Turkey.

Turkish forces launched Operation Claw-Eagle 2 on February 10 to prevent the PKK and other terror groups from re-establishing positions used to carry out cross-border terror attacks on Turkey.

Military operations Claw-Tiger and Claw-Eagle were initiated last June to ensure the safety of Turks, and Turkey's borders.

According to a ministry statement, counterterrorism units of the Security Directorate and Gendarmerie Command carried out operations across 40 of Turkey’s 81 provinces to expose the activities of the group.

The detainees include provincial and district heads of the HDP or Peoples' Democratic Party.

The party is accused by the government of having links with the PKK.

A large number of digital materials were seized in the operations, which took place after Turkey announced the massacre in Gara.

Turkey's Communications Director Fahrettin Altun said that the Turkish nation will not only hold to account the PKK "but also those who walk with them."

"Turkish people will not only hold HDP, PKK to account for our martyrs but also those who walk with them," he tweeted. 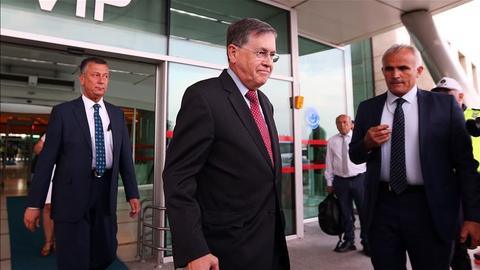 Daunting tasks ahead of new US envoy to Turkey