Pakistan's information minister Chaudhry Fawad Hussain says his government entered into a deal with the hardline protesters to avoid violence sparked by a top court order that acquitted a Christian woman Asia Bibi of blasphemy charges.

Pakistan's information minister on Wednesday said his government was faced with limited choices in dealing with hardline protests over a top court's order to acquit a Christian woman of blasphemy charges.

Chaudhry Fawad Hussain told TRT World his government entered into a deal with the hardliners to avoid violence.

Thousands of religious groups poured onto the streets in protest after Supreme Court judges overturned Asia Bibi's conviction, in a case that has laid bare the divisions between traditionalists and modernisers in the devoutly Muslim nation.

Conservative groups blockaded major cities to demand her immediate execution, in a three-day stand-off that ended when Prime Minister Imran Khan's administration agreed to allow a review of the Supreme Court's ruling.

The minister's remarks came as Italy said it is working to help relocate the family of Bibi, amid warnings from her husband Ashiq Masih that the family's life is in danger in Pakistan.

One week after the country's highest court ordered her release, Bibi was still in prison on Wednesday, with no immediate prospect of freedom.

"Asia Bibi is in Multan jail and has not been released yet. We have not received orders to release her so far," Zawar Hussain Warraich, minister for prisons in Punjab province, told AFP news agency.

"Normally we receive orders in two days after court judgement and if relatives and lawyers of a prisoner are very active, they can bring it even within a day, but as far as Asia Bibi is concerned, it has not happened yet," Warraich added.

"Supreme Court should issue a directive to send us her release orders. We will release her as soon as we get it."

An appeal has been filed with the court against Bibi's release and the party that headed the protests demanding her execution, Tehreek-e-Labaik Pakistan, has warned its hardliners were prepared to take to the streets again.

The case stems from an incident in 2009 when Bibi was asked to fetch water while out working in the fields. Muslim women labourers objected, saying that as a non-Muslim, she should not touch the water bowl, and reportedly a fight erupted.

A local imam then claimed Bibi insulted the Prophet Mohammed, a charge she has consistently denied.

Bibi's husband Ashiq Masih has appealed for Britain or the United States to grant the family asylum, while her lawyer has fled to the Netherlands.

Masih said the delay in releasing his wife, a mother of five, was adding to the family's agony.

"The daughters are weeping. They still haven't seen their mother. The family is totally shattered," he said. 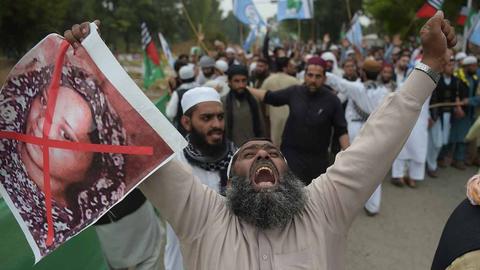