Eight people believed to be still on the White Island are presumed dead, buried under ash and debris from Monday's eruption. Eight people were confirmed killed and dozens were severely burned in the blast of steam and ash.

Continuing volcanic activity has delayed the retrieval of the eight bodies from ash-covered White Island, where an eruption occurred Monday as 47 tourists were exploring the landscape.

Eight people were confirmed killed and dozens were severely burned in the blast of steam and ash.

New Zealand medical staff were working around the clock to treat the injured survivors in hospital burn units.

The enormity of the task was clear when Dr. Peter Watson, a chief medical officer, said at a news conference that extra skin has been ordered from American skin banks. Hospital personnel anticipated needing an extra 120 square meters (1,300 square feet) of skin for grafting onto the patients, Watson said.

White Island is the tip of a mostly underwater volcano that's about 50 kilometers (30 miles) off New Zealand's North Island and has been a popular attraction visited by thousands of tourists each year.

Many were from a Royal Caribbean cruise ship that had left Sydney two days earlier.

New Zealand Prime Minister Jacinda Ardern said Thursday some injured Australians had been medically evacuated and such flights would continue. Australia previously said up to 10 such patients would be transferred to hospitals in Victoria and New South Wales states for further treatment.

New Zealand's GeoNet seismic monitoring agency on Thursday lowered White Island's volcanic alert level to 2, noting there's been no further eruption since Monday, when the level had briefly been raised to 4.

Its alert level since late Monday had been 3 on a scale where 5 signifies a major eruption.

A further eruption in the next day still remains a possibility, the agency said, noting volcanic tremors are rising and steam and mud were being vented regularly. 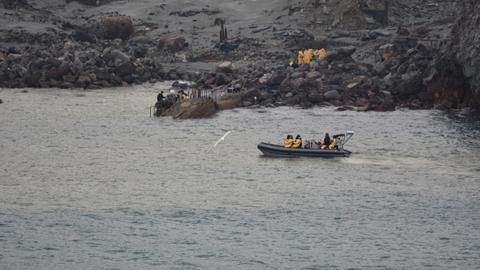