The accident occurred at an unmanned railway crossing close to the city of Sheikhupura in Pakistan's largest province, Punjab.

A passenger train crashed into a bus carrying Sikh pilgrims at an unmanned railway crossing in eastern Pakistan on Friday, killing 20 people, including seven women, officials have said. At least eight pilgrims were injured.

The accident happened in the district of Sheikhupura in Punjab province, according to Raja Ijaz, an official at the state-run emergency service. Ghazi Salahuddin, the district police chief, said the dead and injured were taken to a nearby hospital.

The driver was travelling across an unmanned level crossing when the vehicle was hit by an incoming train near the small city of Farooqabad.

"The crossing was unmanned and the driver of the van took a hasty decision by driving onto the tracks," Pakistan Railways spokeswoman Quratul Ain told AFP, adding that the passengers were all Sikh pilgrims.

The Sikh pilgrims were from the northwestern city of Peshawar and were returning home from a visit to the shrine of Nankana Sahib in Sheikhupura.

The officials said the injured were later transported to a hospital in Lahore, the capital of Punjab province, with two of the victims listed in critical condition.

Asghar Joya, a government official in Sheikhupura, said an initial assessment indicated the bus driver tried to cross the railway tracks as the train neared but the bus skidded and got stuck. He said, however, that officials were still investigating.

TV footage showed the train and the badly destroyed bus on the railway tracks.

Sheikhupura resident Dilbir Singh said the pilgrims, after visiting the shrine and before leaving for Peshawar, had also visited the home of a relative whose family member had recently died.

Sikhs revere Nankana Sahib, located near the eastern Pakistani city of Lahore, which borders India, as the place their religion began and where the founder of Sikhism, Guru Nanak, was born in 1469.

Deeply saddened at the accident this afternoon at a railway crossing near Sheikhupura which resulted in the death of atleast 20 people, mainly Sikh pilgrims returning from Nankana Sahib. Have directed that proper medical care be provided to the injured.

Prime Minister Khan expressed dismay at the accident in a message on Twitter. As prime minister, Khan has overseen the construction of a special border crossing, called the "Kartarpur corridor," allowing Sikhs from India to visit holy sites in Pakistan, despite continued hostile relations between the two countries.

Train accidents are common in Pakistan, mainly due to lack of enforcement of safety standards, a poorly kept railroad system and automobile driver negligence. In February, a train crashed into a bus carrying passengers at an unmanned railway crossing in Rohri district in southern Pakistan, killing 19 people and injuring 28 others.

The railway network has seen decades of decline due to corruption, mismanagement and lack of investment.

Last October at least 74 people were killed and dozens injured after cooking gas cylinders exploded on a train packed with pilgrims in Punjab province. 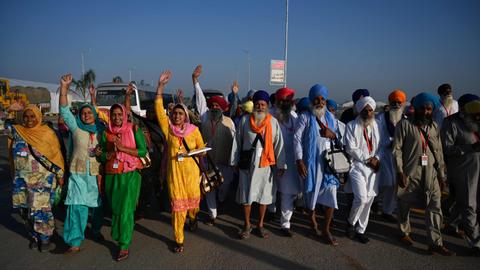