Spacecraft Cassini's last close flyby of Saturn's giant moon Titan is planned for April 22 and then the first of 22 dives between Saturn and its rings will begin April 26.

NASA's unmanned Cassini spacecraft is preparing for its final plunge into Saturn later this year.

It's mission will end after two decades of helping Earth-bound scientists make new discoveries about the sixth planet from the Sun and its mysterious rings.

The final death plunge into Saturn's atmosphere is scheduled for September 15.

For what NASA has described as Cassini's "grand finale" as it runs short on fuel, the spacecraft will soar through a 1,500-mile-wide (2,400-kilometer) gap between Saturn and its rings.

Its goal is to sample Saturn's atmosphere and particles coming from the main rings for the first time, while also capturing the closest-ever views of Saturn's clouds and inner rings, the US space agency said.

"No spacecraft has ever gone through the unique region that we'll attempt to boldly cross 22 times," said Thomas Zurbuchen, associate administrator for the Science Mission Directorate at NASA.

"What we learn from Cassini's daring final orbits will further our understanding of how giant planets, and planetary systems everywhere, form and evolve."

The decision to end the mission was made in 2010, as a way to make sure to avoid damaging moons like Enceladus, which could be explored for signs of water-life in the future.

Cassini launched in 1997 and has been orbiting Saturn, the second largest planet in the solar system after Jupiter, since 2004.

Cassini has made new discoveries about Saturn's icy moons, some of which may have conditions suitable for life.

Cassini dropped a European probe on Saturn's massive moon Titan and revealed its surface of methane liquid seas, including a complex system of rain and runoff.

It discovered that the icy moon Enceladus conceals a subsurface, salty ocean beneath its crust.

Cassini also observed storms, lightning and clouds around Saturn for the first time.

Cassini will make some of its most extraordinary observations at the end of its long life.
Source: TRTWorld and agencies
Related News 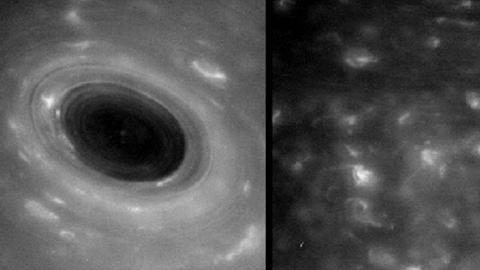