A new Civil Status Law in Syria blocks Yazidis from forming a court to rule on personal status, a right other ethnic minorities in the country enjoy.

The Syrian regime’s Justice Ministry on Sunday issued a new Civil Status Law, ruling that the Yazidi minority in the country are not exempt from Islamic status law, sparking outrage in the community, the New Arab reported.

Under the decision, the ethnic minority’s religion, Yazidism, was defined as a sect under Islam as opposed to being a separate religion.

According to Mohamed al Neser, a coordinator at Communities Empowerment against Extremism program, the decision came after the regime administration forgot to include Yazidis in the new Civil Status Law. As a solution, they decided to deal with the group as a “sect,” not a “religion” as they requested, he said in a tweet.

The Yazidi community says the Syrian regime’s decision to not recognise their belief system is a major violation of basic human rights.

The Yazidis, globally thought to number around 700,000 people, are predominantly ethnically Kurdish, and have preserved their ancient syncretic religion that combines different aspects of Zoroastrianism, Christianity, and Islam. It is however not an Abrahamic religion, despite often being referred to as a sect, as the Syrian regime has done.

The decision also affects the country’s stateless Yazidis. A controversial census in 1962 stripped citizenship from tens of thousands of Kurds, including hundreds of Yazidi Kurds.

According to the Justice Ministry, stateless Yazidis are treated as foreigners and will be referred to civil courts.

Yazidis are a persecuted minority who suffered a massacre at the hands of Daesh in 2014. At the height of its rise, Daesh killed around 5,000 Yazidis and kidnapped, slaughtered, and raped thousands of women. The level of violence was defined as genocide by the United Nations. Years later, the Yazidis continue to uncover the bodies of their loved ones.

Many Yazidis fled to northern Iraq, but they face the risk of being deprived of basic rights there too. The children who were born to Yazidi women as a result of rape by Daesh are not allowed to join the religious community in northern Iraq according to a decision taken by the faith’s Supreme Spiritual Council in 2019.

What Yazidis requested is already a recognised right for Jewish, Christian, and Druze religious minorities in the country. Internationally, the Syrian regime regularly promotes itself as a secular state fighting radicals.

Yet this claim is challenged by the legal system. The country’s Sharia Court has jurisdiction over Sunni and Shia Muslims. However, it's the Mazhabi Court for the Druze, and the Ruhia (Spiritual) Courts for the Christians and the Jews.

In accordance with the system that allows other religious groups to have their own courts, Yazidis have long demanded the recognition of their religious rights in a similar manner through special courts. 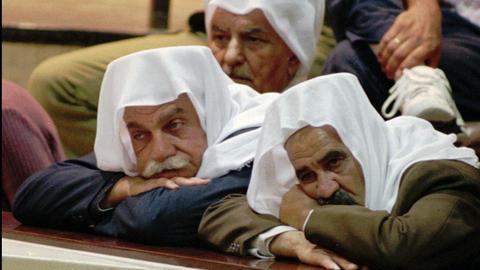