The talks come at a time of heavy diplomatic traffic regarding the Syrian war, including talks between the Astana trio, as well as Turkey and the US, regarding security and governance in northern Syria.

The foreign ministers of Turkey, Russia and Iran are convening in Astana on Friday for the latest round of ministerial-level talks regarding the Syrian war, which entered its eighth year this week.

Turkey has also been holding talks with Washington regarding security and governance in Syria’s north.

Preparations for next trilateral meeting

The meeting will focus on evaluating the situation on the ground in Syria after more than one year of co-operation between the three countries, as well as, discussions regarding the next steps in the war and talks of a settlement agreement.

The meetings will take place without observers, Syrian representatives or parties to the conflict, according to a statement from the Kazakh foreign ministry.

On Thursday, several meetings including those between the senior officials from all three countries, and a Joint Working Group regarding the release of hostages, the transfer of bodies and the search for missing persons, took place.

Russia, Turkey and Iran spearheaded the Astana talks, which started in December 2016, and aimed to complement the mainly-stagnated UN-sponsored Geneva talks. The three countries later became the main actors in the Syrian war by brokering “de-escalation zones” in opposition-held areas.

While the Astana process started as a deconfliction process, the talks took on an increasingly political role under the direction of Russia. This process culminated in the Syrian National Dialogue Congress in Sochi in late January. Although the conference sought to pave the way for a political transition in Syria, it was fraught with problems from the start. Syrian opposition representatives boycotted the congress. Eventually, Turkish officials represented them in the meeting, where the parties decided to set up a constitutional committee.

Turkey, Iran and Russia will give a total of 150 names as candidates for the committee, and the UN Secretary General's special envoy for Syria, Staffan de Mistura, will determine around 30 names in the end. They haven't set a deadline yet for the committee.

The ministerial-level meeting in Astana on Friday will set the stage for an upcoming trilateral meeting between the leaders of the countries in Istanbul in April.

The latest round of talks will also include the regime's violations of the de-escalation deals in opposition-held areas.

Although the Astana trio made deals to help de-escalate the violence in four opposition-held territories, the regime and its backers continue their bombardment of two of the key opposition areas: Idlib and eastern Ghouta. Idlib is the biggest region under opposition control, split between FSA and other moderate opposition groups, and Hayat Tahrir al Sham (HTS), an internationally designated terrorist organisation that previously had ties to Al Qaeda. The regime and its backers use the presence of the HTS as an excuse to launch attacks on Idlib, although many of their attacks are directed towards civilians and moderate opposition areas.

Eastern Ghouta is important for the regime, as it is the last opposition-held area near Damascus, the capital. 400,000 people are trapped in the area, which has been under siege since early 2013.

For the past eight months, the Assad regime has intensified its siege, making it nearly impossible for food or medicine to get into the district, leaving thousands of patients in need of treatment.

Regime air strikes and artillery have been pounding the enclave since February 18, killing over 1,000 civilians since the bombing campaign was launched, according to the Syrian Observatory.

Syria's regime kept carrying out strikes despite the UN Security Council's demand for a ceasefire "without delay" at the end of February.

Moscow and Damascus say their forces only target armed militants and seek to stop mortar attacks by opposition groups that killed dozens of people in the capital.

They accuse the opposition of using civilians as human shields, which the fighters deny and say the regime and its allies target civilians under the pretext of fighting "militants".

Turkey's Afrin operation on the agenda

Another key point on the agenda will be Turkey's Afrin operation, which has seen rapid advancement in much of the region, except for the southeastern city of Tel Rifat.

Operation Olive Branch started after a period of talks between Turkey and Russia. Moscow has controlled Syrian air space since 2015. A couple of hundred Russian soldiers who were there also withdrew from the region before Ankara's operation started on January 20.

Despite the agreement between the two powers, Turkey faced some obstacles on the ground. First, pro-regime and Iran-backed Shia militias continuously facilitated the movement of YPG "reinforcements" from Manbij to Afrin.

Furthermore, there were reports that the Syrian regime had reached a deal with the YPG on February 19, which would see the regime take over the region in exchange for the YPG's withdrawal and the handover of its arms to the regime. However there are different accounts of the deal, and the talks reportedly failed.

Then, pro-regime and Iran-backed Shia militias consisting of a small convoy departed from the Nubl al Zahraa region and tried to advance into the Afrin region, but were eventually stopped by a Turkish air bombardment.

The third concern in Turkey's operation is the presence of Russian soldiers in Tel Rifat, who relocated there from Afrin on the first day of Operation Olive Branch.

The parties are continuing talks, but Tel Rifat remains a region where regime-backer militia groups continue their presence.

The recent weeks have also seen several talks between the NATO allies, the US and Turkey, regarding the future of northern Syria.

After several months of tensions between the US and Turkey, former US Secretary of State Rex Tillerson came to Ankara in February, where the NATO allies agreed to create working groups to address the three main areas of concern: FETO, Syria and Iraq. The first of these meetings took place on March 8 in Washington, where the two countries decided that the US and Turkey will assist in the withdrawal of YPG militants from Syria’s Manbij, and jointly secure the region. Turkey also underlined that if this plan failed, it would conduct a military operation in the northern Syrian city, after its operation in Afrin finished.

The US has been backing the YPG in northeastern Syria for several years, a move met with alarm by Ankara, since the YPG is the Syrian branch of the PKK, a designated terrorist organisation by Turkey, the US and the EU.

The US’ provision of arms, technical and logistical support to the YPG—later renamed the SDF—in northeastern Syria angered Turkey, which views the organisation as the most significant security threat along its border. 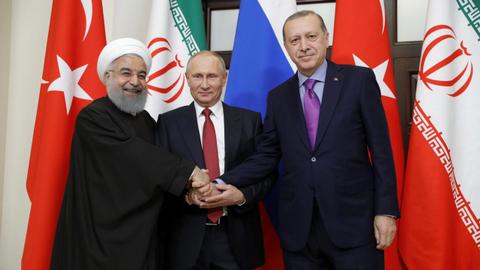 Leaders of Astana trio meet in Ankara for Syria talks