Thousands stream out of eastern Ghouta as regime army advances

At least 12,500 people have left the opposition-held enclave near Damascus as the regime army and its allies continue to launch air strikes and shell the area.

Thousands of Syrians fled an opposition-held town in eastern Ghouta on Thursday and crossed by foot to regime territory, witnesses and a war monitor said, as the regime army pressed its advance into the last major opposition stronghold near Damascus.

Men, women and children carrying blankets, bags and suitcases walked along a dirt road towards regime army positions on the outskirts of Hammouriyeh town, footage on regime TV showed.

The Syrian Observatory for Human Rights (SOHR), a UK-based monitor, said at least 12,500 people left the enclave towards positions of advancing regime forces, which had split eastern Ghouta into three separate pockets.

It marked the first time a large group of people fled the enclave since the regime launched an offensive to recapture it last month, Observatory Director Rami Abdulrahman said.

Fierce fighting is underway for control of Hammouriyeh between fighters of Free Syrian Army (FSA) and regime forces.

TRT World's sources say the FSA's al Rahman brigade recaptured the main Hammouriyeh square and most of the town.

They said 65 regime fighters were killed in the fresh fighting.

FSA also published a video footage of what it said were regime casualties.

Regime forces claimed to have taken the town earlier on Thursday.

The regime troops have gained new ground in their ferocious assault on eastern Ghouta enclave - once the opposition's main bastion on the outskirts of the capital.

Regime forces now control 70 percent of the area, the SOHR said, and have split the remaining rebel territory into three shrinking pockets.

TRT World's Ahmed al Burai explains the significance of the town from the Turkey-Syria border town of Kilis.

Earlier this week, scores of sick and wounded people were evacuated from eastern Ghouta.

In an offensive that began nearly a month ago, Syrian regime forces have splintered opposition territory in eastern Ghouta, which had been the largest opposition bastion near the capital.

The International Committee of the Red Cross (ICRC) said 25 aid trucks entered a pocket further north, controlled by opposition faction Jaish al Islam, and was headed to the town of Douma.

ICRC spokeswoman Iolanda Jaquemet said the convoy, which entered through the Al Wafideen crossing, contained enough food aid for 26,100 people for one month, among other items.

A parcel can feed a family of five for one month.

Moscow and Damascus say their forces only target armed militants and seek to stop mortar attacks by opposition groups that killed dozens of people in the capital.

They accuse the rebels of using civilians as human shields, which the fighters deny and say the regime and its allies target civilians under the pretext of fighting "militants."

The opposition-held eastern Ghouta enclave has been under siege by the regime forces and allies since 2013. 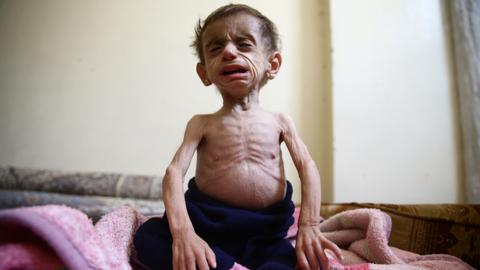