Interior minister says protesters will "pay the price" after a third night of unrest saw mass demonstrations across the country in which two people have been killed and dozens arrested.

Iran warned on Sunday that protesters will "pay the price" after a third night of unrest saw mass demonstrations across the country in which two people were killed and dozens arrested.

The protests which began in the city of Mashhad on Thursday as an attack on high living costs quickly turned against the government as a whole.

As videos on social media showed thousands marching across the country on Saturday, an official in the small western town of Dorud confirmed two people had been killed during protests, but denied security forces had fired on the crowd.

"Unfortunately in these clashes, two citizens from Dorud were killed. No bullets were fired by the police, military or security forces towards the people," he said.

'Violence will be confronted'

However, Iran's interior minister warned Sunday that "violence, fear and terror" will be confronted after a third night of protests against the government.

"Those who damage public property, disrupt the order and break the law must be responsible for their behaviour and pay the price," Abdolrahman Rahmani Fazli said on state television.

"The spreading of violence, fear and terror will definitely be confronted. The vigilance and intelligence of people has always led any plot to fail," he said.

Videos on social media overnight showed demonstrations in Isfahan, Mashhad and many smaller cities but travel restrictions and limited coverage by official media made it difficult to confirm reports.

Semi-official conservative outlets confirmed an evening attack on a town hall in Tehran and showed protesters attacking banks and municipal buildings in other parts of the country. Mehr news agency showed protesters overturning a police car and burning the Iranian flag.

Reports of clashes and marches spread across Iran on Saturday despite government warnings against any further "illegal gatherings."

Videos posted on social media on Saturday showed two young Iranian men lying motionless on the ground and covered with blood and a voiceover said they had been shot dead by police. Other protesters in the same video were chanting, "I will kill whoever killed my brother!"

"People are protesting because there are under economic pressure and the government must be responsive in the face of rising inflation and these economic hardships," said Mostafa Kiaie, a demonstrator.

"We urge all those who receive these calls to protest not to participate in these illegal gatherings as they will create problems for themselves and other citizens," said Fazli.

A swirl of wild rumours, combined with travel restrictions and a near-total media blackout from official agencies, made it difficult to confirm the reports.

The authorities appeared to respond by temporarily cutting internet access to mobile phones, but full coverage was eventually restored.

Several Iranian news agencies warned Telegram, the most popular social media service in the country, might soon be shut down after communications minister Mohammad Javad Azari Jahromi accused one channel, Amadnews, of encouraging an "armed uprising".

There was chaos earlier on Saturday around the capital's university as hundreds took to the streets, blocking traffic and shouting slogans against the regime.

But the authorities could also count on a show of strength, with hundreds of counter-demonstrators seizing control of the university entrance, chanting "Death to the seditionists".

Annual rallies marking the defeat of the last major protest movement in 2009 had already been scheduled for Saturday morning and brought thousands of government supporters to the streets across the country.

There were even chants in favour of the monarchy toppled by the Iranian revolution of 1979, while others criticised the government for supporting the Palestinians and other regional movements rather than focusing on problems at home.

State news channel IRINN said it had been banned from covering the protests that spread to towns and cities including Qom and Kermanshah.

"The enemy wants once again to create a new plot and use social media and economic issues to foment a new sedition," Ayatollah Mohsen Araki, a prominent cleric, told a crowd in Tehran, according to the conservative Fars news agency.

Other officials also pointed the blame outside Iran.

Oppressive regimes cannot endure forever, and the day will come when the Iranian people will face a choice. The world is watching! pic.twitter.com/kvv1uAqcZ9

The entire world understands that the good people of Iran want change, and, other than the vast military power of the United States, that Iran’s people are what their leaders fear the most.... pic.twitter.com/W8rKN9B6RT

The days of America looking the other way from the Iranian regime's oppression are over. America stands with the Iranian people. https://t.co/UXDH1TgWky

"People have the right for their voice to be heard."

There has been particular anger at welfare cuts and fuel price increases in the latest budget announced earlier this month.

Some of this week's protests were directed against financial scandals linked to unauthorised lending institutions which collapsed with the loss of hundreds of thousands of accounts.

Officials from across the political spectrum have called for greater efforts to tackle poverty and the 12 percent unemployment rate. 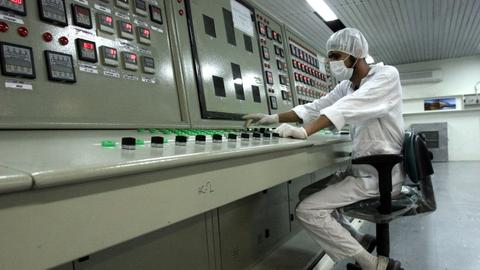