Israeli forces have killed at least 120 Palestinians in Gaza since protests began on March 30. Thousands more have been injured in demonstrations against the loss of Palestinian lands, Israel's blockade of Gaza, and the US embassy move to Jerusalem.

A large turnout on the Gaza border is expected later on Friday and protests are also expected to take place in the West Bank to mark Al Quds Day.

At least 120 Palestinians have been killed by Israeli fire during near-weekly demonstrations that began on March 30. Thousands have been injured.

The Hamas-led demonstrations have been fueled by despair over a decade-old Israel-Egyptian blockade, imposed after Hamas began governing the territory.

Demonstrators have also called for the "Right of Return" to their homes in what is now Israel. Some two-thirds of Gaza's two million people are descendants of refugees who fled or were forced from their homes during the war surrounding Israel's establishment in 1948.

The deaths and injuries caused by the use of live fire by Israeli snipers in Gaza has brought wide-spread condemnation.

Al Quds Day is an annual event held on the last Friday of Ramadan and inaugurated in 1979 by Iran's first Supreme Leader, Ayatollah Ali Khomenei, in support of Palestinians and Arab and Muslim rights in Jerusalem. Quds is the Arabic name for Jerusalem.

Friday's demonstrations are meant to coincide with 'Jerusalem Day', a day of protest against Israeli control of the city of Jerusalem.

Earlier this week, Hamas leader Ismail Radwan said, "On the 51st anniversary of the occupation of Jerusalem and the rest of the Palestinian and the Arab territories, we affirm that we continue the march of return and break the siege in a peaceful and popular way until we achieve our goals."

TRT World's Iolo ap Dafydd reported that pamphlets were dropped in Gaza by Israel forces encouraging Palestinians to stay away from the border.

Meanwhile, the speaker of Iran's parliament Ali Larijani said that security in the Middle East could be threatened if Tehran was further pressured by its arch foes Israel and Saudi Arabia.

Tens of Thousands of Iranians took part in anti-Israel rallies across the country to mark Iran’s annual day of solidarity with the Palestinians. They chanted "Death to Israel" and "Death to America", burning the Israeli flag.

"Israel and Saudi Arabia are the source of chaos in the region. The Saudi Arabia, Israel and American triangle wants to turn the region into a chaotic scene," state television showed Larijani telling demonstrators. "The region's security will be threatened if they corner Tehran."

There were also reports of protests against Israel in Baghdad. 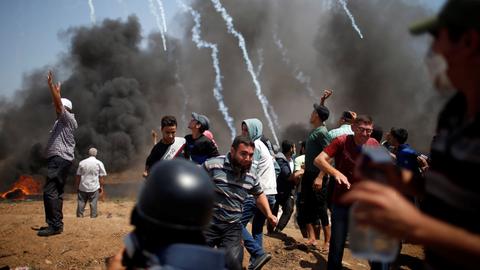