The country’s Jewish community looks forward to its first congregational prayers after months without public worship.

Turkey’s Jews are preparing to open synagogues in Istanbul after three months of closure due to the country’s coronavirus lockdown measures.

Synagogues will officially have their first prayer services on the Sabbath, Saturday June 13.

During the lockdown measures, all places of worship including mosques, churches and synagogues had been closed down as weekly congregational prayers were altogether cancelled.

Turkey has earned praise from different corners of the world for its efficient anti-virus policy, keeping its death toll low and managing to flatten the curve.

According to Salom, the Jewish community’s newspaper in Turkey, only people who make early reservations for prayers will be allowed in with a total of 15 men and 5 women per synagogue. The numbers could increase in time keeping in view guidelines set out by Turkey’s Science Committee.

In recent decades, Turkey has worked to strengthen and improve conditions for minorities from restoring various minority places of worship to encouraging non-Muslim communities to become more visible in public life.

Since the beginning of the Ottoman Empire, the predecessor state of Turkey, non-Muslim communities from different Christian denominations to Jews have maintained their places of worship across imperial and later Turkish territories.

Keeping in vein with the tolerance practised during Ottoman times toward non-Muslims, Turkish President Recep Tayyip Erdogan has also encouraged minority communities to flourish across the country.

The reconstruction of the Grand Synagogue of Edirne

Five years ago, in the northwestern province of Edirne, a historic city, which was the Ottoman capital before their conquest of Istanbul from the Byzantium Empire, Turkey’s Jews celebrated the reconstruction of their lovely synagogue after its closure in the early 1980s.

The synagogue’s restoration cost nearly 6 million Turkish lira or approximately $1 million, which was funded by the Turkish government and overseen by the country’s General Directorate of Foundations.

The synagogue could be the largest Jewish place of worship across the Balkans and it might be the third largest in the whole European continent, according to some experts.

The first ceremonial opening of the synagogue in 2015 was overseen by Rabbi Davud Azuz, who also held the last Jewish prayer service there nearly four decades ago.

As high-level Turkish authorities attended the first religious prayer, the municipality of Edirne, which played an important role in the restoration effort, put banners which read "Welcome home, our old neighbours," referring to the city’s Jewish residents.

The city’s Jewish history goes back to the 14th century, when many Jews from different parts of Europe migrated to Edirne after the Ottomans claimed the city from its Byzantium rulers in 1361.

Under the brutal Spanish Reconquista (reconquest) movement in the late 15th century, more Sephardic Jews came to the city, increasing its Jewish population.

In the 20th century, much of the city’s Jewish population left Edirne after several political incidents in the Republican period.

Many years later, under Erdogan the Turkish state has moved to develop closer relations with the country’s Jewish community leaders from time to time.

Restoration efforts have not been limited to just synagogues.

It could be “the first church to be constructed during the Republican period” according to Sait Susin, the President of Istanbul Syriac Orthodox Church Foundation, which has been instrumental in the development of the project.

The Turkish government also restored Istanbul’s famed Iron Church, which opened in January 2018, costing nearly $3 million, most of which was paid by the Istanbul metropolitan municipality and other state institutions.

Beyond restoration efforts, Ankara also began a process of returning many non-Muslim properties to its original owners.

Between 2003 and 2014, more than a thousand “unidentified” non-Muslim properties, which were either confiscated by the state or unused by non-Muslims for different reasons, have been reinstated to minority community foundations, according to legal experts. 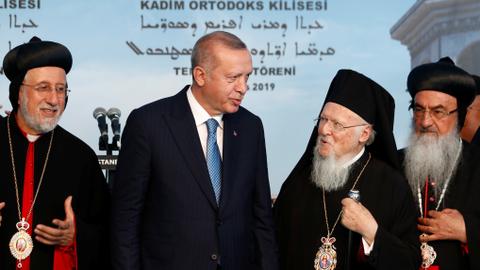