Protests in Sudan loom after military crack down

Khartoum residents continued to protest Sudan’s military rule in the streets after security forces cracked down the rally that left several people dead.

Protesters barricaded roads in the east Khartoum district of Burri on Friday as well as in nearby Khartoum North using rocks, tree branches and tyres.

Hamdok was reinstated on November 21, but mass protests have continued as demonstrators distrust Burhan's promises of seeking to guide the country toward full democracy.

As the authorities on Thursday cut off communications across the country, security forces clamped down on demonstrations, firing live rounds and tear gas as tens of thousands gathered in Khartoum, Khartoum North and nearby Omdurman.

Four protesters were fatally shot in Omdurman, according to the pro-democracy Doctors' Committee, while a fifth succumbed to his wounds Friday after he was shot in central Khartoum.

Protesters charge that the deal to reinstate Hamdok simply aims to give the cloak of legitimacy to the generals, whom they accuse of trying to continue the regime built by former autocratic president Omar al Bashir, who was toppled in 2019 following mass protests.

He said he had sent a message to Burhan's office requesting a meeting "to present to him my resignation... over the violence against demonstrators".

Two journalists from Saudi Arabia's Asharq television channel, Maha al Talb and Sally Othman, were released after they and their crews were held for several hours, the channel said Friday.

Police had also stormed the bureau of the Al Arabiya television network funded by Saudi Arabia - seen as a traditional ally of Sudan's military leaders.

The violence and attacks on the media drew widespread condemnation.

"Deeply troubled by reports that Sudanese security forces used lethal force against protesters, blacked out the internet, and attempted to shutdown media outlets," US Secretary of State Antony Blinken tweeted after Thursday's events.

The Doctors' Committee has accused security forces of blocking ambulances and of forcibly removing at least one seriously injured protester from an ambulance.

The Sudanese Communist Party called for "urgent international solidarity to demand an end to the bloody repression in Sudan and the immediate release of all political detainees".

Protesters have renewed demands that the military "return to their barracks" as promised in 2019 when Bashir was toppled and the country came under the control of the Sovereign Council, a body composed of both civilian and military figures, headed by Burhan.

A police spokesman had said four people died in Thursday's unrest and 297 people were injured, "including 49 police officers".

He also said "three police vans were set on fire" and accused protest leaders of having sought to "turn a peaceful march into violence and confrontations with the security forces".

An adviser to Burhan told the state news agency on Friday that "the demonstrations are a waste of time and energy" and would not lead to a political solution.

The violent crackdown since the October coup has claimed 53 lives and left hundreds wounded. 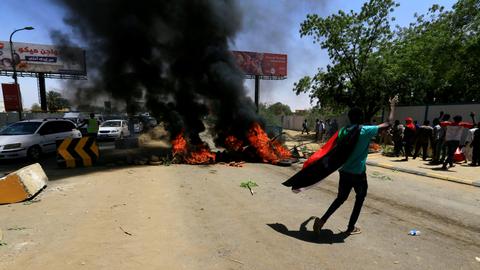