Muslim countries requested the meeting in response to the US recognition of Jerusalem as Israel's capital. The assembly will vote on a draft resolution calling on Trump to rescind his declaration. Ambassador Haley said, "The US will be taking names."

The 193-member United Nations General Assembly will hold a rare emergency special session on Thursday at the request of Muslim states on US President Donald Trump's decision to recognize Jerusalem as Israel's capital, sparking a threat from Washington that it will "take names."

Palestinian UN envoy Riyad Mansour said the General Assembly would vote on a draft resolution calling for Trump's declaration to be withdrawn, which was vetoed by the United States in the 15-member UN Security Council on Monday.

The remaining 14 Security Council members voted in favor of the Egyptian-drafted resolution, which did not specifically mention the United States or Trump but which expressed "deep regret at recent decisions concerning the status of Jerusalem."

TRT World spoke to New York-based William Denselow for the latest developments on the story.

Mansour said on Monday he hoped there would be "overwhelming support" in the General Assembly for the resolution. Such a vote is non-binding, but carries political weight.

US Ambassador Nikki Haley, in a letter to dozens of UN states on Tuesday, warned that the United States would remember those who voted for the resolution criticizing the US decision.

"The president will be watching this vote carefully and has requested I report back on those countries who voted against us. We will take note of each and every vote on this issue," Haley wrote.

At the UN we're always asked to do more & give more. So, when we make a decision, at the will of the American ppl, abt where to locate OUR embassy, we don't expect those we've helped to target us. On Thurs there'll be a vote criticizing our choice. The US will be taking names. pic.twitter.com/ZsusB8Hqt4

Under a 1950 resolution, an emergency special session can be called for the General Assembly to consider a matter "with a view to making appropriate recommendations to members for collective measures" if the Security Council fails to act.

Only 10 such sessions have been convened, and the last time the General Assembly met in such a session was in 2009 on occupied East Jerusalem and Palestinian territories. Thursday's meeting will be a resumption of that session.

Trump abruptly reversed decades of US policy this month when he recognized Jerusalem as Israel's capital, generating outrage from Palestinians and the Muslim world and concern among Washington's Western allies.

Trump also plans to move the US embassy to Jerusalem from Tel Aviv. The draft UN resolution calls on all countries to refrain from establishing diplomatic missions in Jerusalem.

Haley said on Monday that the resolution was vetoed in the Security Council in defense of US sovereignty and the US role in the Middle East peace process. She criticized it as an insult to Washington and an embarrassment to council members.

Israel considers Jerusalem its capital and wants all embassies based there.

Palestinians want the capital of an independent Palestinian state to be in the city's eastern sector, which Israel occupied in a 1967 war and the move never recognized internationally.

Turkey's foreign minister said he will travel to New York with his Palestinian counterpart for Thursday's UN General Assembly meeting on the US decision to recognise Jerusalem as Israel's capital to try to stop America making "an unacceptable" move.

"We want America to turn back from this wrong and unacceptable decision," Turkish Foreign Minister Mevlut Cavusoglu told a news conference with his Iranian and Azeri counterparts in the Azeri capital Baku on Wednesday.

Cavusoglu said he would travel to the United States via Istanbul, where he would be joined by Palestinian Foreign Minister Riyad al Maliki.

Turkey has sharply criticised Trump's move, and Turkish President Tayyip Erdogan hosted a summit of Muslim leaders last week which called for East Jerusalem to be recognised as the capital of Palestine.

"From now on we will be more active in defending the rights of Palestinians. We will work harder for the international recognition of an independent Palestinian state," Cavusoglu told reporters in Baku. 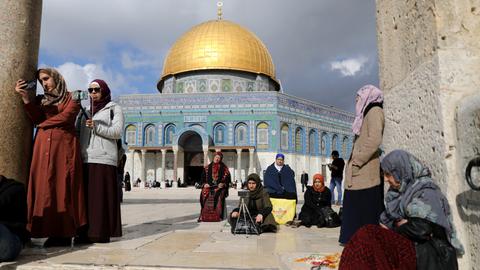 UN council mulls call for US Jerusalem decision to be withdrawn