Floods devastate Peru. What's the extent of the damage?

About 75 people have died and almost 100,000 are homeless after the worst floods to hit Peru in nearly two decades. Experts say the heavy rainfall is due to climate change and the government should have been better prepared.

What has happened after three months of heavy rain?

The torrential downpours that began in January have wreaked havoc in Peru's western coastline and northern region.

Avalanches, mudslides and extensive flash flooding have killed dozens. Tens of thousands of houses have been washed away. Many highways and bridges have been destroyed.

Peruvian floodplains that have been dry for 20 years and where about half a million people live – many in houses made of wood and straw – have been hit the hardest.

Electricity has been disrupted and access to clean water has been restricted throughout the region.

In Lima, the capital, school was suspended and running water has been restricted after treatment systems were clogged. A rush to buy bottled water has now led to many supermarkets experiencing shortages.

"We've never seen anything like this before," said Peruvian army general Jorge Chavez, who is coordinating the government's response.

"From one moment to the next, sea temperatures rose and winds that keep precipitation from reaching land subsided," Chavez said.

More than 56 thousand acres of crops like grapes, mangos and bananas, the bulk of Peru's agricultural exports, have been damaged. Agriculture accounts for nearly six percent of the South American nation's exports.

The extreme weather could fan inflation as some food prices have risen on supply disruptions from farming regions.

However, not all economic predictions are negative.

A Latin American financial analyst with 4Cast, Pedro Tuesta, suggested that Peru's floods could bolster economic growth in the second quarter if the government developed a fast and effective reconstruction strategy.

"Peru may have fewer assets but the flow of production could be larger," Tuesta said.

How is the government responding?

The Peruvian government has declared a state of emergency and dispatched aid and rations by plane and ships to the hardest hit areas.

A special tax exemption has also been introduced for companies donating food and other goods.

Could the government have been better prepared?

The reaction is mixed.

While the heavy rains occurred during Peru's traditional "landslide season", this year's deluge was ten times more than usual.

Environmental experts said climate change played a big part, warning the Peruvian government that weather patterns are changing and they need to prepare for the effects.

The opposition in Peru holds the same view.

"We know the ‘coastal El Nino' comes from time to time. We know we are a country that is extremely vulnerable to the effects of climate change. We should have prepared ourselves better," New Peru movement leader Veronika Mendoza said.

The precipitation has been fuelled by the abnormal warming of Pacific waters off the coast of Peru by what is called the El Nino phenomenon.

The periodic warming of Pacific Ocean waters charges clouds with tremendous loads of water, which fall on coastal areas, setting off avalanches from steep hillsides and causing rivers to overflow.

Local scientists said that the worst is not yet over. The El Nino phenomenon will likely continue through April.

"We need more and better bridges, we need highways and cities with drainage systems," said Chavez, underlining the importance of developing infrastructure designed for the forecasted "tropicalisation" of Peru's northern desert coast. "We can't count on nature being predictable." 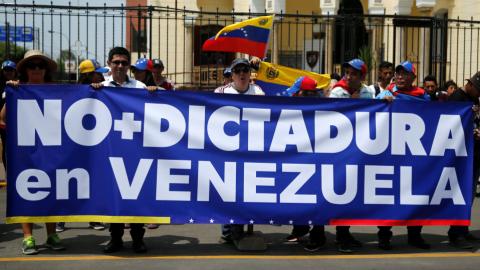