Trump said he did not see any Democrat who could beat him because he says he knows them all.

US President Donald Trump says he intends to run for president again in 2020.

He made the comments during another interview with British newspapers.

He's told them he doesn't see anyone who could beat him, because he says he knows them all.

Asked by British journalist Piers Morgan in an interview given on Friday whether he was going to run in 2020, Trump was quoted by the Mail on Sunday as saying: “Well I fully intend to. It seems like everybody wants me to.”

Before leaving Britain for a summit in Finland with Russian President Vladimir Putin, Trump breached British royal protocol by publicly disclosing the details of a conversation he had with Queen Elizabeth about the complexities of Brexit.

When asked if he discussed Brexit with the monarch when they met for tea at Windsor Castle on Friday, Trump said:

Speaking of the 92-year-old queen, Trump was quoted as saying: “She is an incredible woman, she is so sharp, she is so beautiful, when I say beautiful - inside and out. That is a beautiful woman.” 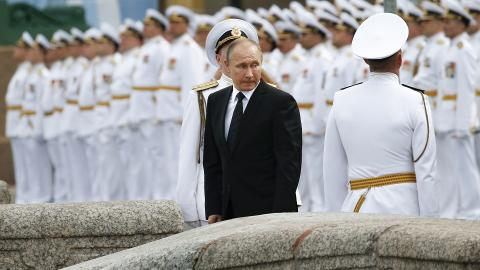 Putin says US must cut 755 diplomatic staff in Russia