At least 16 dead, over 100 wounded in Afghan blast

The death toll from a Taliban suicide attack in Afghanistan's capital Kabul late Monday night has risen to 16 civilians, with another 119 people wounded, an official said.

Smoke rose on Tuesday morning as angry Kabul residents set fire to part of the compound that has been a frequent target of attacks.

The blast occurred just hours after a US envoy briefed the Afghan government on an agreement "in principle" with the Taliban that would see 5,000 U.S. troops leave the country within five months.

The explosion sent a plume of smoke into the night sky over Kabul and caused a nearby gasoline station to burst into flames.

Another interior ministry official, Bahar Maher, told the local TOLO news channel that the blast was caused by a car bomb.

“It was a horrifying explosion,” a witness, Wali Jan, said. One hospital director, Dr Nezamuddin Jalil, said the wounded included women and children.

The Green Village, home to many foreigners and heavily guarded by Afghan forces and private security guards, has been a frequent target.

The compound was hit by a suicide car bomber in January who killed at least four people and wounded scores. That blast occurred when the US envoy, Zalmay Khalilzad, was visiting the capital to brief the Afghan government on his negotiations with the Taliban on ending America’s longest war.

Monday’s latest blast occurred during the final minutes of a nationally televised interview with Khalilzad on what a US-Taliban deal might mean for Afghanistan’s future.

Earlier on Monday, Khalilzad showed a draft deal to the Afghan president after declaring that they are “at the threshold of an agreement” following the end of the ninth round of US-Taliban talks in Qatar. The agreement still needs President Donald Trump’s approval.

Trump last week told Fox News the US plans to reduce its troop presence to 8,600 and then “make a determination from there.” He has been eager to withdraw troops before next year’s election and the draft deal easily meets that deadline.

The reduction would bring troop levels down to roughly where they were when Trump took office in January 2017. A further troop withdrawal is expected to depend on the Taliban meeting conditions of the deal, including a reduction in violence.

Shaken Kabul residents question whether any agreement with the Taliban can be trusted, especially as foreign troops withdraw.

The Taliban are at their strongest since the US-led invasion to topple their government after the Sept. 11, 2001 attacks on the United States, and now control or hold sway over roughly half the country. The Taliban want all of the estimated 20,000 US and NATO forces to leave Afghanistan and already portray their departure as the insurgents’ victory.

For its part, the US seeks Taliban assurances that Afghanistan will not be a safe haven for extremist groups to plan and launch global terror attacks.

Reflecting the sensitivity of the negotiations and the Afghan government’s sidelined role in the talks so far, it was not clear whether President Ashraf Ghani was given the draft to keep.

“We have reached an agreement with the Taliban in principle but of course until the US president agrees with it, it isn’t final,” Khalilzad told TOLO news.

He said that under the deal, the first 5,000 US troops would withdraw within 135 days from five bases in Afghanistan. Between 14,000 and 13,000 troops are currently in the country.

The Taliban have stepped up attacks in recent months to strengthen their negotiating position, carrying out deadly assaults over the weekend on two provincial capitals.

The United Nations and others say Afghan civilians have suffered, often caught in the crossfire as government forces, backed by the US, have pursued the militants with airstrikes and raids. Afghanistan was the world’s deadliest conflict in 2018.

Afghan presidential spokesman Sediq Seddiqi told reporters the government would study the draft US-Taliban deal to make sure it addresses the goals of a lasting ceasefire and direct talks with the Taliban in the near future. “It will take a couple of days, probably, that we will get back to them and give them our observations,” he said.

The Afghan government has been shut out of the U.S.-Taliban negotiations, as the militant group dismisses it as a US puppet, but intra-Afghan talks that include the government are meant to follow a US-Taliban deal. The Kabul government says its negotiating team is ready but refuses to say who is on it.

A US official with Khalilzad’s negotiation team recently said that “any potential peace deal will not be based on blind trust, but will instead contain clear commitments that are subject to our monitoring and verification.” The official spoke on condition of anonymity because they were not authorized to discuss the matter with the media.

The official added that a deal would lead to “intra-Afghan negotiations where the Taliban will sit with other Afghans and together they will commit to a permanent and comprehensive ceasefire.” 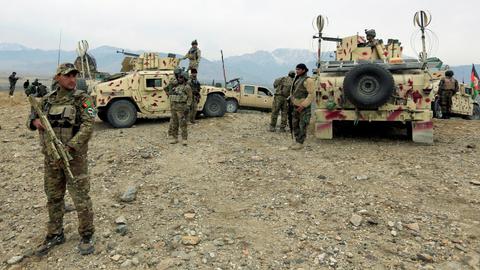