Experts may be divided on whether a landslide or a glacier burst caused deadly flooding in Uttarakhand, but there is a consensus that ignoring warnings against building mega-projects in the vulnerable area contributed to the losses.

Massive floods that crashed into two hydroelectric plants and damaged villages in northern India have put the spotlight back on mega-construction projects in the Himalayan region. The disaster in Uttarakhand state left dozens dead and scores missing in its wake, baffling experts over why warnings about constructing dams or plants in the path of destruction were ignored despite a similar tragedy in 2013.

"No lessons were learned from the 2013 floods," Himanshu Thakkar, coordinator of the South Asia Network of Dams, Rivers, and People (SANDRP) told TRT World.

"The government hasn't even initiated an exercise to study what caused that disaster, or what factors augmented it, or which government body failed in its role," Thakkar said.

"This is the first step to learn from a tragedy. Nothing of that sort happened here."

The disastrous floods that took place eight years ago, also known as the ''Himalayan Tsunami," killed almost 6,000 people and wiped out hundreds of millions in construction.

Memories from 2013 came flooding back this Sunday after what some scientists say was a landslide and others say was a glacier burst on Nanda Devi mountain that unleashed a powerful flood in Chamoli district, killing 32 people mostly at power plant sites. Nearly 170 people remain missing three days after the flooding, including labourers at the two power plants.

Rescue efforts continued into Wednesday to find 34 people believed to be stuck in Tapovan – where the Tapovan-Vishnugad Hydropower plant project lies along the Dhauliganga River – in a 2.7-km tunnel that quickly filled with mud and boulders when the flood struck.

The floodwater surging downstream in the Alaknanda and Dhauliganga rivers carried with it mud, rocks and boulders, damaging dams and filling them with silt and crashed into villages in the eco-sensitive region. The two rivers meet further down before merging into the Ganges River.

"Several days have passed, there is no explanation from the government on what exactly caused the disaster or its exact location," Thakkar said, adding, "What were Indian satellites and the relevant government agencies doing? We don't know."

Official comment from the government was not available immediately.

As Environment Minister, I came under sharp attack for stopping hydel projects on Alaknanda, Bhagirathi and other rivers in Uttarakhand on ecological grounds. We weren’t considering the cumulative impacts of these projects. I can't help but recall that now.
#UttarakhandDisaster pic.twitter.com/44Z1CZXRU3

It is not yet clear what exactly triggered Sunday's floods but experts say the construction of dams in the seismically active area left people and infrastructure wide open for a hit.

Renowned Indian environmentalist Ravi Chopra, who was part of a scientific committee appointed by India's Supreme Court to make recommendations to the government after the 2013 landslides and flash floods, told TRT World  that the area is not feasible for dams.

"Our report (also called Chopra Committee report) clearly warned against the building of hydroelectric power projects and dams in the paraglacial zone – areas that are 2,200 metres above the sea level," said Chopra, who is also the director of People's Science Institute in Uttarakhand. A paraglacial zone is an unsteady landscape in areas characterised by permafrost thaw-degradation.

The Chopra report was adopted by the Indian Ministry of Environment and Forests in 2014, which sent the report to the Indian apex court, Chopra said.

"Unfortunately, some private players and the Uttarakhand government appealed the top court against scrapping some of these dams," he said.

"Later, more committees were formed. The case continues in the court, pending decision while disasters keep knocking Uttarakhand, where many large dams have come up in the paraglacial zones," Chopra told TRT World.

The Chopra Committee report recommended the Indian government scrap at least 23 hydropower projects. It concluded hydropower projects played a significant role in the 2013 Uttarakhand floods and that there is an urgent need to improve the environmental governance of these projects.

Building dams in path of destruction

In paraglacial zones, in the event of flooding, water flowing downstream carries with it rocks, boulders, and mud with greater energy and intense stream power (defined as the product of water density, gravitational acceleration, discharge and bed slope). Essentially, the flood becomes more weaponised, breaking barriers and knocking down everything in its path.

"This is exactly what happened on Sunday," Chopra said, adding the warning was there but nobody heeded it.

In a 2016 off-the-record interview, a water specialist who worked with the World Bank on a report about Indian dams said some 15 large Indian dams in the Himalayas are "dodgy" and shouldn't have been commissioned at all.

"In [the World Bank] the survey, two of these [dams] were found adequate but not earthquake-proof. [The] other 13 should have never been built. The bank found a lot of corruption in [the] Indian dam-building system but didn't publish the survey though," the expert said at the time.

Am constantly monitoring the unfortunate situation in Uttarakhand. India stands with Uttarakhand and the nation prays for everyone’s safety there. Have been continuously speaking to senior authorities and getting updates on NDRF deployment, rescue work and relief operations.

Uttarakhand, which falls under seismic zones IV and V, is known to have vulnerabilities such as landslides, avalanches, flash floods, or Glacial Lake Outburst Flood (or GLOF), which is a sudden breach in a glacial lake.

Scientists and experts say the haphazard construction, part of it carried out by blasting explosives, in the region amplified Sunday's devastation that was caused downstream.

"There is no direct role of hydropower projects in Sunday's disaster," Thakkar said, "but once the flood raged, disaster followed because of what we were doing downstream."

Gareth Price, an expert on water security issues in South Asia and a senior research fellow at Chatham House, told TRT World the impact of natural disasters has been worsened by both deforestations as well as the construction of infrastructure in the Himalayas.

"I would say glacial outburst floods do occur naturally," Price said, "but the construction of infrastructure – dams, tunnels, roads, and houses, coupled with deforestation in environments such as the Himalayas, combine to make their impact worse, and potentially their occurrence more likely."

With the rescue mission in its fourth day and India rushing scientists to the region, experts are divided over what caused the flood. Did a part of the Nanda Devi glacier near Trishul Peak snap off at 5,600 metres, and if so what caused it, or was the incident not glacier-driven?

"There were at least 25 glaciers in the area of the Nanda Devi Biosphere Reserve, where the avalanche may have started, and it is not yet known which glacier partially collapsed," Pradeep Srivastava, a scientist at the Wadia Institute of Himalayan Geology in Uttarakhand capital Dehradun, told The Third Pole.

Mohd Farooq Azam, assistant professor of glaciology and hydrology at the Indian Institute of Technology in Indore, told Reuters news agency that a hanging glacier may have fractured.

Ankal Prakash, Research Director at Indian School of Business' Bharti Institute of Public Policy, said the "prima facie evidence we are seeing is that it's because of the glacial decline and melting because of global warming."

Indian Institute of Science's Anil Kulkarni, who has studied Himalayan glaciers for decades, told Telegraph India, a  GLOF occurred in the Alakananda river basin, a region where scientists have identified over 20 glacial lakes.

Fabulous graphic, great use of Planet Labs images. In India some scientists are still claiming that this was caused by a GLOF 🙄. These images show why that is not correct. https://t.co/emyy2WXOJz

But the satellite imagery-based study by Dave Petley of the University of Sheffield suggested that a landslide may have sparked the accident.

"Whilst the cause of this event is clearly established, the media is continuing to publish stories that this was a glacial collapse, or an avalanche, or a GLOF. There was real uncertainty at the start, but we have known what happened for 24 hours now," he wrote in his blog.

"This is important as a set of conspiracies are starting to emerge as to the cause of this landslide. For example, there are suggestions that such an event cannot occur in winter, meaning that it was dynamite that triggered the disaster. Some sources are linking this to activities by China," he said.

"This is not the case. This was a classic progressive failure in [the] mountain flank."

Petley's arguments were backed by Dan Shugar, a geomorphologist of the University of Calgary, who said the disaster occurred after "a landslide took out part of a hanging glacier."

"So, this landslide probably contained both bedrock as well as glacier ice. It descended a steep slope and likely disintegrated when it hit the valley floor. This is where things get interesting, scientifically," he tweeted.

As more information regarding the cause of disaster trickles in, hundreds of rescue workers are racing against time to find the last of the survivors, with troubled families, converged at the site hoping against hope and almost resigned to the probability they were no longer alive. 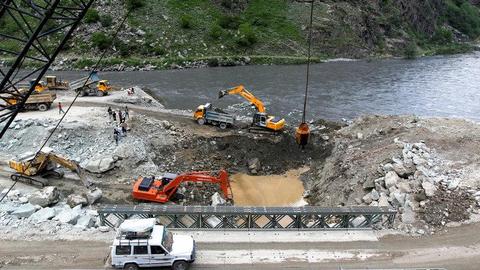