'Let it rot on the trees': Apple farmers protest India's actions in Kashmir

Either in anger or at the urging of local rebels, farmers have joined in the rebuke of India's actions in the disputed region by deliberately sabotaging a crop known as "spine of Kashmir's economy."

Farmers in Kashmir are deliberately leaving their apples to rot, undermining the restive territory's most lucrative export as bitterness towards the Indian government grows.

New Delhi has deployed tens of thousands of troops since early August in addition to more than 500,000 already there when it scrapped the region's decades-old semi-autonomous status and brought in a communications blockade that cut off Kashmiris from the outside world.

Political leaders and thousands of civilians have been arrested, with allegations of torture and abuse levelled at authorities –– which deny them –– and protests have since raged in India-administered Kashmir.

Either in anger or at the urging of local rebels farmers have joined in the rebuke of India's actions by deliberately sabotaging a crop vital to the local economy.

The fertile Himalayan region usually sells hundreds of millions of dollars worth of apples each year, and more than half of Kashmiris are engaged directly or indirectly in cultivation.

At one orchard in central Shopian district, Ghulam Nabi Malik and his brother usually sell 7,000 boxes of apples a year for markets and kitchen tables across India, earning them some seven million rupees (nearly $100,000).

Their land is now idle, with branches sagging under the weight of unpicked fruit.

"Let it rot on the trees," Malik said.

Amid the latest unrest, Malik told AFP news agency that harvesting would allow the Indian government "to tell the world that everything is fine in Kashmir."

And everything, he says, is far from fine.

Anti-India rebels have circulated letters and stuck posters outside mosques, appealing to orchard owners not to harvest and instead join the "resistance."

"Apple growers and students are ready to sacrifice this year and not betray the blood of martyrs," reads one such notice, nailed to a wooden post and signed by a local rebel commander.

Many farmers say they are willing participants in the campaign, although there have been threats and one orchard owner –– a local bigwig close to Prime Minister Narendra Modi's party –– was attacked.

In one village, a former police officer who deserted to join a rebel group set fire to empty boxes his own family had bought for packing fruit.

Rebels have also put pressure on fuel stations, forcing off the roads many trucks needed to transport the fruit.

But locals insisted to AFP that the rebels were not the reason for abandoning what they say is a bumper crop this year.

"To leave the ripe apples rotting on the trees is the only form of protest we can do under the current circumstances," Malik said.

People say they are more frightened of Indian troops, who often haul away young men from villages at night.

"There is fear (of the rebels), but it's not like the fear of the state forces," said one villager who declined to be named, fearing reprisal.

Modi says that with tens of thousands killed in Kashmir's 30-year-old anti-India insurgency, his government has acted to end "a vicious cycle of terrorism, violence, separatism and corruption."

The regional government has tried to resolve the situation with the apples by promising security for growers and offering to buy apples directly. It insists these measures are working.

Deliveries of apples to the market were only down by around 25 percent, said Metharam Kriplani of the New Delhi-based Kashmir Apple Merchants Association.

The "biggest problem" facing buyers was the lack of phone lines as a result of the region's communications lockdown, he said.

But growers that spoke to AFP have refused the offer of government support, and fruit markets in Shopian and elsewhere in Kashmir are empty –– despite some traders claiming that local authorities attempted to browbeat them into opening as normal.

The authorities "threatened that they would destroy the shops (at the market) if we didn't open. But the market is deserted," said Bashir Ahmad Bashir, head of the local fruit-growers association.

In the ongoing crackdown, Indian authorities arrested an estimated "13,000 boys", according to a fact-finding report by a team of five women who visited the region recently.

"One estimate given to us was 13,000 boys were lifted during this crackdown," the report said about the alleged detentions by Indian forces to disallow any protests.

Our Kashmir coverage has been nominated for a Lovie Award for best news video series.

We take you through the challenges we faced as we covered this ongoing story. 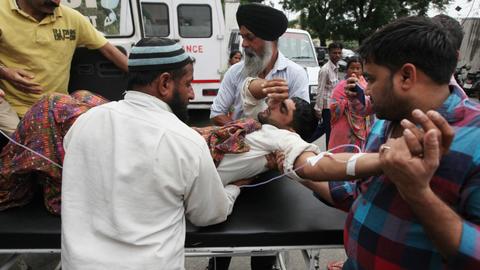