Russia's Foreign Ministry said on Friday it had every reason to believe Kiev was responsible for the death of eastern Ukraine rebel leader Alexander Zakharchenko.

Russian foreign minister said on Saturday talks on Ukraine with leaders from Russia, Ukraine, France and Germany, known as the Normandy format, were impossible after the killing of a rebel leader in eastern Ukraine, Interfax agency reported.

"It is impossible to talks about upcoming meetings in the Normandy format as many of our European partners wanted," Sergei Lavrov told reporters.

"This is a serious situation that needs to be analysed," Lavrov said, referring to the killing of Alexander Zakharchenko, leader of Russian-backed separatists in the Donetsk region of eastern Ukraine who died in an explosion on Friday.

The 42-year-old was the head of state and prime minister of the self-proclaimed Donetsk People's Republic.  Zakharchenko became leader of the Donetsk Republic in 2014.

Russia's Foreign Ministry said on Friday it had every reason to believe Kiev was responsible for his death, RIA news agency said.

Foreign Ministry spokeswoman Maria Zakharova said Zakharchenko's death showed that Kiev had decided to engage in a "bloody fight" and had passed up on its promises of seeking peace, RIA reported.

Ukraine's security service said on Friday it believed the death was a result of conflict conflict between the rebels and their Russian sponsors.

Yelena Gitlyanskaya, a spokeswoman for the Ukraine security service, said "all of the accusations that can be heard from the Russian side are not true." 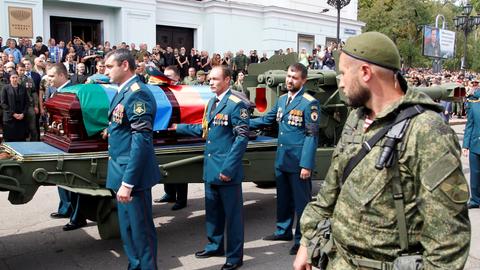