'Migration is like water, it will find its way through'

TRT World interviews Stef Biemans, a Dutch journalist who has lived in Central America for more than a decade.

In the documentary “Bad Hombres”, Dutch journalist Stef Biemans travels between Guatemala and the US to meet the people undertaking the most heavily used migration route on earth.

Why did you decide to move to Nicaragua?

Stef Biemans: I have lived in Nicaragua for 15 years because I fell in love with my wife. We got married in 2004, then I moved there. Nicaraguan people are creative, inventive, cheerful and very open. I love the way they fight for their rights, in a very peaceful but determined way, which is shown in last year’s protest, which is on-going. Nicaragua is a country that deserves a better government, after so many years of trouble and corruption.

While filming Bad Hombres, what was the most heart-breaking encounter you had? Could the situation have been changed?

SB: Definitely the moment we found a young boy who died in the desert. It seemed he had been looking for water and died just a few hundred meters from a water tank that was put there by volunteers. We went into the Arizona desert with Aguilas del Desierto, a group of Latinos who came to the States themselves and now volunteer to provide water and food when they find immigrants who are lost. I read that now helping undocumented immigrants under Trump is a crime. The Arizona desert has no wall, and I think this was done on purpose, to encourage immigrants to enter the desert at its most dangerous spot. I think there is not a lot you can change about people looking for a better life. Migration is like water, it will find its way through. The only thing you can do is be humane and help other people in need.

In the film, you were interviewing the anti-immigrant couple in the desert and you turned away when they pulled out a Nazi flag. Do you think their opinions could have been changed through dialogue?

SB: No, I don't think so. There is a lot of misinformation about immigrants that they just come to take jobs or harass their women, and the people I interviewed actually lost their job, so their image will be coloured by misinformation and their own frustration, which is understandable too. I have seen the journey that it takes to get from Guatemala to the US, and it left me without a doubt that you have to have serious reasons to start this journey and leave everything behind. You don't just go tralala let's see if I can get into the States.

Are you still in contact with the immigrants you followed on the film? What is their current state of affairs?

SB: We are still in contact with Omar, the boy we met in Mexico and Texas, when he made it. He was actually the only boy who made it, and I thought he would not, because he looked so naive and was kind of skinny, so very young too. He still lives in the US and managed to get his girlfriend and two kids across too. His friend, who jumped the train in Mexico, died when he was deported to El Salvador, after the filming. He was shot by a gang member when he came out of church with his younger brother.

Given the recent immigration bill in the United States, what do you feel can be changed on a policy level for Latin American refugees to lead better lives?

SB: I think everyone deserves a fair chance to get into any country in the world. Some countries are so strict (including the States, but also the Netherlands) that it is almost impossible to have a decent life. I am not saying you have to let in everyone, but just don't be that selfish, share your wealth and knowledge with people who really need it, share your country and your culture, it will not lead to any major problems. Migration is not the problem. Yes, our traditions might change a bit, and yes we will have to be a little bit more tolerant to other cultures and religions, but after all we are all travelers, in life and on this planet. If you look from outer space, there are no borders. So stop whining about "protecting what is ours" just because we came there first. 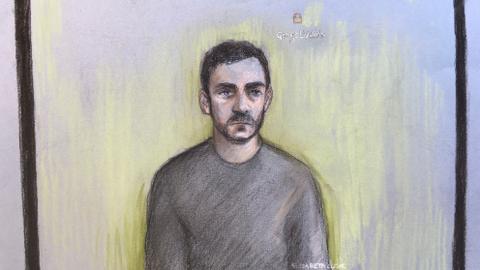