A NASA mission to deliberately smash a spacecraft into an asteroid to see if its course can be altered has blasted off from California.

The DART (Double Asteroid Redirection Test) is a test run should humanity ever need to stop a giant space rock from wiping out life on Earth.

The goal is to slightly alter the trajectory of Dimorphos, a "moonlet" around 525 feet or two Statues of Liberty) wide that circles a much larger asteroid called Didymos (2,500 feet in diametre).

The pair orbit the Sun together.

The impact should take place in the fall of 2022 when the binary asteroid system is 11 million kilometres from Earth, almost the nearest point they ever get.

Asteroid Dimorphos: we're coming for you!

Riding a @SpaceX Falcon 9 rocket, our #DARTMission blasted off at 1:21am EST (06:21 UTC), launching the world's first mission to test asteroid-deflecting technology. pic.twitter.com/FRj1hMyzgH

"What we're trying to learn is how to deflect a threat," NASA's top scientist Thomas Zuburchen said of the $330 million project, the first of its kind.

To be clear, the asteroids in question pose no threat to our planet.

But they belong to a class of bodies known as Near-Earth Objects (NEOs) –– asteroids and comets that approach within 30 million miles.

NASA's Planetary Defense Coordination Office is most interested in those larger than 460 feet in size, which have the potential to level entire cities or regions with many times the energy of average nuclear bombs.

READ MORE: A small rock orbiting the Sun, may be a chunk of the Moon

If all goes well, the spacecraft that NASA plans to launch today will smash itself to bits against an asteroid.

If all goes absolutely perfectly, that impact will jostle the asteroid into a slightly different orbit. https://t.co/HD5tOjsqgt pic.twitter.com/nkVlyv5LCS

There are 10,000 known near-Earth asteroids 460 feet in size or greater, but none has a significant chance to hit in the next 100 years.

One major caveat: scientists think there are still 15,000 more such objects waiting to be discovered.

Asteroids that are six miles or wider –– such as the one that struck 66 million years ago and led to the extinction of most life on Earth, including the dinosaurs –– occur around every 100-200 million years.

READ MORE: What is ‘space junk’ and what are we doing about it?

A NASA asteroid defence expert has told Newsweek that, in the event scientists spot an asteroid coming towards Earth, blowing it to pieces would not be such an outlandish idea pic.twitter.com/vhJsMsVSlQ 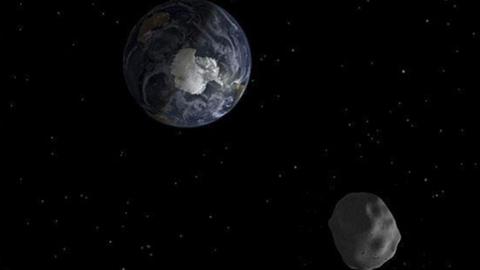