The deadly brutality unleashed over the weekend across Nigeria is prompting serious questions over the country’s internal security.

At least 31 Nigerian soldiers were killed when militants from The Islamic State in West Africa (Daesh), ambushed a military convoy and overran a base in the northeastern state of Borno at the weekend.

According to army officials who spoke to AFP on the condition of anonymity, the militants attacked the convoy on Sunday with rocket-propelled grenades in the town of Mainok, just outside the regional capital of Maiduguri. They then went on to storm the nearby army base.

"We lost 31 soldiers, including their commander who was a lieutenant colonel, in the ambush by the terrorists," one officer said about the attack.

The army later issued an official statement confirming they had engaged in hours of intense battles on Sunday that also saw warplanes deployed.

"I saw them while fighting with soldiers," said resident Ba Umar Abba Tuja.

"When the fighter jet started hovering in the air, the (militants) fled to the community and hid in the primary school," Tuja said.

The town of Mainok has been repeatedly targeted by the militants who have waged a decade-long insurgency in the region, killing 36,000 people and displacing around two million more from their homes.

ISWAP split from the mainstream Boko Haram faction in 2016 and rose to become a dominant force as the conflict spilt over Nigeria’s borders into neighbouring Chad, Niger and Cameroon.

Meanwhile, in neighbouring Yobe state on the same day, around 2,000 residents fled their homes after a separate attack by ISWAP hit the town on Friday.

Locals flocked to a nearby river in order to escape from their town which had fallen under militant control after Friday’s attack.

Late on Friday, the militants began looting and burning stores in the town soon after they had taken control following a shootout with Nigerian troops.

The exodus was prompted by targeted killings of residents by the insurgents, according to fleeing residents.

Although the statement issued by the army on Saturday claimed that it had taken back control of the town, residents and local officials said militants were still around.

The Abduction of Students

In northwestern Kaduna state, it was announced that criminals had executed two more university students who were abducted last week, bringing the total number of killed hostages to five.

The murders in Kaduna state by criminals known locally as "bandits'', mark an escalation in the mass kidnappings of students that have plagued northwestern and central Nigeria. This rapid rise has prompted six northern states to shut public schools to help prevent further attacks.

A member of the school staff was killed during the assault and the bodies of three students were later discovered in a nearby village.

Last Tuesday, armed men stormed Greenfield University in Kaduna state, the latest in a series of abductions at educational institutes that are mostly carried out for ransom.

Schools have been a constant target for militant groups as they are usually located in remote areas where students live in dormitories with only a few watchmen for security.

According to UN agency UNICEF, around 730 students have been abducted since December 2020, disrupting the studies of more than five million children.

The violence is so widespread that even southeastern Nigeria is not immune from the worrying surge in attacks.

Five security officers, including two soldiers, were killed on Saturday by suspected separatists in Nigeria's oil hub of Port Harcourt.

The police said, "armed men believed to be Indigenous People of Biafra (IPOB) members attacked a Joint Task Force (JTF) checkpoint, made up of nine police and two soldiers."

Port Harcourt, the capital of the southern oil-rich Rivers state, has seen a surge in deadly attacks targeting police and other security forces in the past few months.

According to police, the assaults took place in two locations on Saturday, and that two burnt corpses were recovered in one location while three were found somewhere else.

IPOB, which has not responded to the claim, is an outlawed movement that wants an independent state of Biafra for the Igbo people, indigenous of southeastern Nigeria. 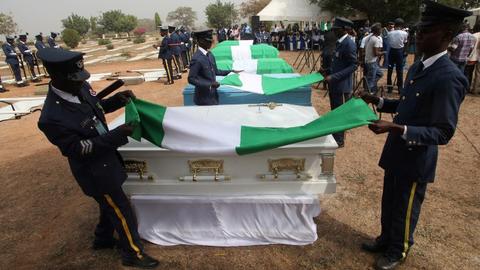