Israel’s longest serving prime minister negotiates with the country’s justice ministry for plea deal, which might save him from prison but it will also ban him from politics.

Benjamin Netanyahu, Israel’s controversial leader, has been reportedly moving toward a plea deal with the country’s Attorney General Avichai Mandelblit who will step down from his post at the end of this month.

Netanyahu has long rejected Mandelblit’s corruption accusations, with which the Israeli leader was indicted with three charges in 2019. But now he appears to favour the plea deal, which also means that Netanyahu will plead guilty for some of the charges, accepting that he conducted corrupt acts during his long tenure.

It might also mean that he could be out of politics because the deal includes a clause of “moral turpitude”, which will have banned him from politics for at least seven years. It’s a long time for a politician like 72-year-old Netanyahu, the opposition Likud leader.

For Netanyahu, who claimed to champion not only Israeli but also worldwide Jewish interests, accepting “moral turpitude”, which is "an act or behavior that gravely violates the sentiment or accepted standard of the community" according to legal analysts, is like receiving a political death sentence.

But he does not have better options and things could get worse for him if he continues to reject all charges. Even one of the three charges against him is good enough for him to receive a jail time up to 10 years.

“Netanyahu decided to go for a deal and accept the attorney general’s bottom line,” said a source close to the Likud leader. It appears that Mandelblit’s bottom line is the clause of “moral turpitude”. Netanyahu’s lawyer Boaz Ben Zur also thinks that the deal “has to be accepted.”

The deal can be a middle-way solution for both Netanyahu and the Israeli state. By not punishing Netanyahu so harshly, the state establishment might convey a coded political message to him that he will be respected somewhat if he doesn’t involve in direct political game. There is also another message that Israel is capable of punishing one of its own.

But while taking the deal is apparently the most rational option for him, what makes Netanyahu hesitant on the plea agreement?

The clock ticks down

Among others, Netanyahu’s main problem could be time. For a long time, he wanted to delay his case as much as possible, investing in a hope that someway he would be able to stay in power, preventing the prosecution to go ahead against him.

But after four unprecedented inconclusive elections, he was out of power and his enemies formed a complicated government. It means the anti-Netanyahu ruling coalition has the authority to choose the next attorney general, who can even potentially bring more accusations against Netanyahu. Mandelblit’s terms ends on January 31.

That prospect makes Mandelblit, an Orthodox Jew, whose appointment was approved by Netanyahu, the lesser than two evils for the Israeli leader while the Netanyahu family hates him to a large extend.

Being aware of the potential dangers lying on his path, according to Israeli analysts, Netanyahu wants to reach an agreement with his chief accuser Mandelblit, believing that he could be his get out of jail free card despite his family’s reservations.

But he is also running out of time because many senior officials in the State Attorney’s Office also believe that there is not enough time to reach an agreement under Mandelblit as intense negotiations continue to rage between the two sides.

The limited time also creates a serious problem for the Attorney General and the prosecutors because they need to reformulate their charges in parallel to the plea deal in less than two weeks.

The Israeli justice of the case might also find the prosecution’s changes to the charges problematic after long considerations and come up with a heavier sentence or a dismissal, both of which are not desirable for both sides.

Beyond time issues, he also has other problems like family dissent.

During long negotiations, both Netanyahu’s legal team and the Attorney General officials have discussed possible legal scenarios with not only the Likud leader but also his wife and other family members, Israeli media reported.

According to the deal, Netanyahu will at least serve a community service, which is a disgrace for any politician, as well as accepting moral turpitude. That angers the Netanyahu clan a lot.

But even more problematic fact for the Netanyahu family is the circulation of increasing rumours related to the deal, which suggests that the country’s longest serving hawkish prime minister accepts corruption charges.

That is a blow to Netanyahu’s solid hardline political base, which has appeared to stick to the Likud leader despite all accusations against him during the elections and so far. The Likud still maintains to be the largest political bloc in the Israeli parliament.

But if the man, whom his base loves so much, accepts that he conducted corruption, how could he motivate them to stand for him and his family?

Netanyahu’s wife Sara, a psychologist, has recently acknowledged that problem. “The prosecution is toying with us. They’ll show everyone that Bibi is prepared to admit to crimes, and then they’ll drop the deal. Mandelblit cannot be trusted,” she said. Recent polls suggest that majority of Israelis want to see a full trial against Netanyahu not a plea deal.

According to some accusations, Netanyahu’s corruption conduct might also be tied to his efforts to make his wife happy and show his love by providing luxury jewelry and clothes to her, using his political leverage over his rich contacts. 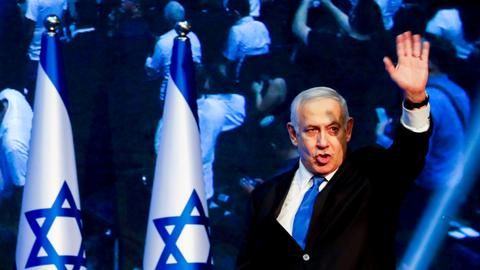