Iran's re-elected president Hassan Rouhani has been sworn in for his second term in an open parliament session.

Rouhani, 68, secured re-election on May 19, promised that his country will pursue a "path of coexistence and interaction with the world."

Rouhani has vowed to open Iran up to international investment and trade, but the Islamic Republic insider who has held senior political and military posts since the 1979 Islamic Revolution, faces enormous challenges, including deepening political divisions among the country's ruling elite and US President Donald Trump's aggressive Iran policy.

Rouhani was first elected in 2013 with nearly 51 percent of the vote.

Iran's state TV reported that more than 130 high-ranking officials from various countries and international organisations attended the ceremony in Tehran.

The emir of Qatar, which has fallen out with its Gulf allies in part over ties to Iran, was notably absent despite attending Rouhani's last inauguration in 2013.

It was the first time in Iran's history that a large number of foreign officials attended the president's inauguration ceremony.

Adam Weinstein, a policy associate at the National Iranian American Council spoke to TRT World about what to expect from Rouhani's second term.

Security in the capital has been increased to the highest level, the police said, two months after gunmen linked to the Daesh attacked the parliament and the mausoleum of the late Ayatollah Ruhollah Khomeini, killing 17 people.

Rouhani's deputy said on Wednesday that Rouhani would keep on two important ministers for his second term: Oil Minister Bijan Zanganeh, who is largely credited with closing a deal with the French oil major Total, and Foreign Minister Zarif, Iran's lead negotiator in the nuclear agreement.

The powers of the elected president are limited by those of the unelected Supreme Leader who outranks him, but the scale of Rouhani's victory can give the pragmatist president a strong mandate.

However, analysts say Rouhani may struggle to make a significant impact given sharpening divisions in the dual clerical-republican power structure in Iran, and Trump's aggressive policy against Tehran.

While he spoke much about women's rights during his campaign, Rouhani is not expected to select any women for his cabinet.

He also has a debt to pay to reformists who put their weight behind his election campaign. 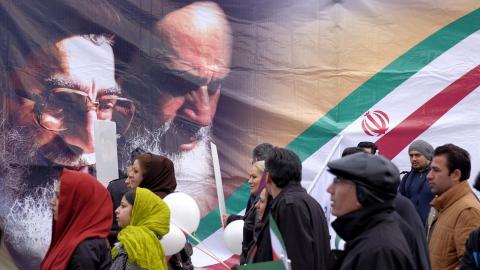