Fearing attacks from above, Syrians in Idlib head underground

1
No longer just fiction: Machines can smell your breath to diagnose you
2
India imposes ban on many single-use plastics to tackle waste
3
Iran 'determined' to continue negotiations on nuclear agreement
4
Dozens of Palestinians injured as Israeli settles storm West Bank shrine
5
Israel's outgoing PM Naftali Bennett will not run in next election

Backed by its allies Russia and Iran, the Syrian regime has targeted several areas of Idlib with artillery and air strikes, sometimes hitting hospitals and rescue centres in the country's last major opposition and rebel-held stronghold.

The grotto in northwestern Syria has already saved his children's lives once. Fearing more air attacks, Abdulmonem is expanding the makeshift bomb shelter in case they need to take refuge there again.

Residents of Idlib province and surrounding areas have been bracing themselves for a Russian-backed regime offensive on the country's largest remaining rebel-held zone.

Some three million people live in the area and the United Nations has warned that a full-scale regime assault could spark the century's worst humanitarian catastrophe.

Residents' fears have been heightened by Russian and regime air strikes, artillery fire and barrel bombs that have killed more than 30 civilians across the province in the past month, according to the Syrian Observatory for Human Rights (SOHR).

Sat outside the craggy cave opening in his hometown of Kafr Ain, in Idlib's south, Abdulmonem Sheikh Jassem explains how he is trying to keep his family safe.

"About 10 days ago, we started digging out, expanding, and equipping the cave in case there's new bombing," says Jassem, a 55-year-old former truck driver.

Citing a bad back and knee problems, he has hired a labourer to transform the grotto into a full shelter.

Working by the dim light filtering in through the mouth of the cave, the elderly worker chips away at the rock face with a pickaxe to widen the cramped space.

The builder's two scrawny children, covered in a thick layer of dust, move rocks torn loose from the wall to a wheelbarrow outside, which they periodically dump in the nearby hills.

"We're expanding it out, then we'll paint it and put stairs at the entrance so you can go up and down easily," says Jassem, who has four daughters and two sons of his own.

'Scared for my children'

Two years ago, Jassem and his family rushed to the very same cave to hide from an incoming regime helicopter.

"Our house was demolished but we were in the cave, thank God, so no one was wounded or hurt," he says, his coarse salt-and-pepper hair tapering down into stubble on his tanned, wrinkled face.

"I'm the most scared for my children," he says. "Fear is normal for those who have a family."

Syria's conflict erupted in 2011. Within four years, rebels and hardline militants had overrun swathes of territory, including Idlib province.

But since then, regime troops have made a fierce comeback and recaptured nearly two-thirds of the country, bolstered by regime and Russian warplanes.

The regime's use of air raids across Syria has sent residents fleeing to basements or caves, even forcing hospitals, community centres and schools to move underground.

Medics in rural parts of Idlib have done the same.

On September 8, an underground hospital on the outskirts of Hass in the south of the province was damaged by an air strike, according to the SOHR.

A recent wave of strikes near the town of Hobeit further south sent Abu Mohammad, his uncle and his young cousins into their homemade bomb shelter.

The family dug out the large cellar during the early years of Syria's war. The floors and walls have been smoothed over with concrete and painted, and several fluorescent bulbs cast a blue-white light into the room.

A shelf carved into one wall holds water and jars of pickles and other preserves.

"The bombing got worse on this area because it's close to regime territory in northern Hama province," just south of Idlib, says Abu Mohammad, 25.

"We had to clean the shelter out again, bring preserves and everything we might need so that we won't have to go back up to the house."

Bombardment has slowed over the past week, and on Friday, Russian Foreign Minister Sergei Lavrov denied that regime troops were planning a major offensive on Idlib. 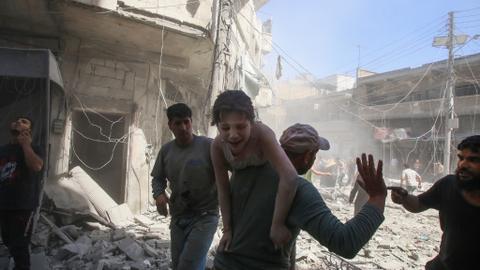 1
No longer just fiction: Machines can smell your breath to diagnose you
2
India imposes ban on many single-use plastics to tackle waste
3
Iran 'determined' to continue negotiations on nuclear agreement
4
Dozens of Palestinians injured as Israeli settles storm West Bank shrine
5
Israel's outgoing PM Naftali Bennett will not run in next election