UN special envoy Martin Griffiths told the Security Council that there had been a dramatic deterioration in the more than six-year-long war with a Houthi offensive on Marib, putting millions of civilians at risk.

The United Nations has warned that an offensive by Houthi rebels in Yemen has escalated the nearly six-year conflict in the Arab world’s poorest nation as it “speeds towards a massive famine.”

UN special envoy Martin Griffiths and UN humanitarian chief Mark Lowcock painted a grim picture of the political, economic and humanitarian crisis in Yemen, which is exacerbated by a government blockade of fuel ships entering the country’s main port of Hudaida controlled by the Houthis.

The intensified fighting has come amid an international and regional diplomatic push to end the conflict which began with the 2014 takeover of the capital Sanaa by the Iranian-backed Houthis.

A Saudi-led coalition supported by the US and allied with the government has been fighting the rebels since March 2015.

US President Joe Biden’s envoy to Yemen, Tim Lenderking, last week urged the Houthis to agree to a ceasefire proposal.

Griffiths told the UN Security Council the Houthis’ weeks-long offensive on the oil-rich central province of Marib, the government’s last stronghold in Yemen’s northern half, has put an estimated one million already displaced civilians at risk.

Fighting forces on both sides have suffered “heavy losses,” he said.

Griffiths reported to the Council the conflict in #Yemen is deteriorating with the continuation of Ansar Allah’s offensive on #Marib &cross-border attacks. He reported airstrikes hit #Sanaa, endangering civilians &noted other frontlines escalating in #Hajjah, #Taiz & #Hudaydah

Missile and drone strikes from Houthi-controlled areas into Saudi Arabia targeting civilian and commercial infrastructure “have also increased significantly in recent weeks,” Griffiths said. And retaliatory airstrikes on Sanaa city are “endangering civilians there as well.”

Griffiths said other fronts have also opened, with government forces earlier this month launching an offensive against rebel positions in western Hajjah province, and fighting in the government-held southern province of Taiz.

The result has been “a dramatic deterioration” in the conflict, he said.

In addition to the suffering of Yemenis, Griffiths called for an independent investigation into the cause of last week's fire at a Houthi detention center in Sanaa holding predominantly Ethiopian migrants that killed dozens and seriously injured over 170.

On the humanitarian front, Yemen, which imports most of its food and other commodities, remains the world’s worst crisis.

Both Griffiths and Lowcock urged the entry of fuel ships to Hudaida, warning that the blockade since January has increased prices of food and other goods and put hospitals and other services, including water which needs fuel for its pumps, at risk.

“Right now, 13 fuel ships are waiting outside Hudaida, carrying two months of imports,” Lowcock said, explaining that the government isn’t clearing them because of a dispute with the Houthis over revenue from the fees and taxes on the oil ships.

Despite the recent escalation in fighting in Marib and elsewhere, Lowcock told the Security Council that “the renewed US commitment to a diplomatic solution has opened a window for anyone who is serious about ending the war."

He again warned that “Yemen is speeding towards a massive famine" and said “that opportunity will be wasted if Yemen tips into famine.”

“So, I again call on everyone to do everything you can – including money for the aid operation – to stop the famine,” the undersecretary-general for humanitarian affairs said.

I can’t say this enough: once a famine has arrived, we’re too late. Lives have already been lost. Without urgent intervention in #Yemen this year, we risk losing one child every 75 seconds.

A UN pledging conference on March 1 raised a disappointing $1.7 billion, less than half of what aid agencies need this year, which means “we don’t have enough money to stop famine,” Lowcock said.

Last week, UN World Food Program chief David Beasley, who had just returned from Yemen, told the council it was “hell on earth in many places” and warned that “we are heading straight toward the biggest famine in modern history.”

Griffiths said with famine now arriving, “a nationwide cease-fire, along with opening Sanaa airport and ensuring the unhindered flow of fuel and other commodities into Yemen through Hudaida ports, are urgent humanitarian imperatives.”

The UN envoy said the US engagement “gives us all more energy and a great deal of hope.”

But Griffiths expressed alarm that “the mere fact of meeting across the table to discuss the contours of ending the war is being framed as a concession rather than an obligation.”

US Ambassador Linda Thomas-Greenfield said the Biden administration is stepping up diplomacy to reach a cease-fire and negotiate an end to the conflict, “but there can be no cease-fire and no peace in Yemen if the Houthis continue their daily attacks against the Yemeni people, Saudi Arabia, and other countries in the region.” 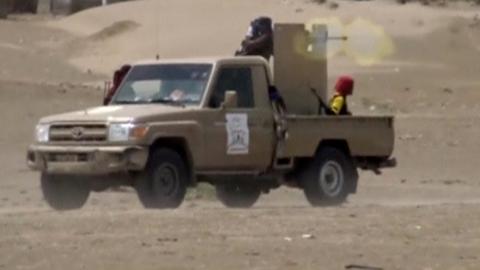