With the fourth German Islam Conference coming to a close in Germany, the Muslim community should feel worried that the government still doesn’t understand them.

After more than a year of preparation, the fourth German Islam Conference (DIK) began last week. More than 200 people from religious and political life, accompanied by academics, sat through panels discussing the role of Islam in Germany.

It began with a speech by German Interior Minister Horst Seehofer, who expressed a more reserved view compared to his past statements, in which he has said that Islam is not part of Germany and that migration “is the mother of all issues”.

The first German Islam Conference in 2006 was assessed as a step in the right direction towards cooperation between the German state and the Muslim community. For the first time, the state engaged in a dialogue with Muslim representatives at the highest level in order to discuss, among other topics, the recognition of Muslim communities in constitutional law.

This fourth conference attempted to focus, controversially, on the definition of a ‘German Islam’ or ‘German Muslim’ – an attempt to define Muslims in Germany through state-orientated objectives.

Even if Seehofer stated during his opening speech that he does not want to patronise, instead aiming to be a bridge builder, the choice of themes and participants illustrates his direction is somewhat different.

The conference was overshadowed by the serving of pork sausages served to attendees – questioning the respect and awareness of Muslim norms by the minister and the public servants organising the event. Even though the ministry later apologised, it wasn’t the first time this had happened.

Many of the topics discussed focused on the elephant in the room; tensions between Germany and Turkey, the Turkish population in Germany and the Turkish-Islamic Union for Religious Affairs (DITIB).

DITIB is one of the largest Muslim organisations in Germany in terms of the number of mosques which the German government would prefer was under its influence as it aims to detach the Turkish community from having a relationship with Turkey.

The German government wants Muslim imams to be solely trained in Germany and wants Germans of Turkish origin to identity firstly with Germany rather than their dual identity.

Diversity through ‘liberals’ and ‘secularist Muslims’?

One topic that came up in every conference panel or was repeatedly introduced by the moderator was the notion and desirability of "liberal Muslims" or "liberal Islam" and the ‘initiative of secular Islam’ surprisingly launched days before the conference.

The participation of marginal groups - as became clear during their talks - who were also very divided among themselves, was quite controversial. Many of them have little if any standing amongst the wider Muslim community and, until a few weeks before the conference, it wasn’t clear whether they would be invited at all. However, it seems they were used as political leverage to confront the major Muslim organisations.

Their controversial inclusion occurred for several troubling reasons. Firstly, to please right-wing organisations and presumably the some people in the German government. Secondly their inclusion appears to be part of an effort to marginalise Muslim organisations that represent the majority of believers of the Islamic faith in Germany.

Contributions from the representatives of ‘liberal’ and ‘secular’ Islam appeared limited to a small number of thematic areas. The construct of a ‘secular Islam’, which alone is a paradoxical because ‘secular’ in the strict sense of the word means ‘non-religious’, was just another indication of the explicit agenda of the conference.

The secular Islam initiative is not much more than the attempt to find its way into the Islamic discourse with the label of Islam - but without having anything Islamic at all. Those who follow them will find nothing but a ‘religion without religion’.

A German state-sanctioned Islam in the making

The event was instructive from two different angles.

Many, mostly marginal, Muslim representatives and other actors outbid each other in making it clear that they were ‘good German Muslims’. Contrary to their intention, they contributed to the consolidation of the divide between Muslim communities and strengthened mechanisms of exclusion.

The label ‘German’ was adopted and internalised alongside the rightly-criticised labels of ‘liberal’ and ‘secular’ - without any prior discussion of substantive content. These new labels, which are primarily targeted at Muslims of an immigrant background, make multiple identities impossible by subsuming everything under ‘German’. But why should a Muslim with Turkish and German roots see himself firstly and only as a ‘German’?

Secondly, the issue of financially supporting the Muslim community emerged at the conference. With the German government wanting to fund education for Muslim imams, many in the community will feel troubled that such an important service would fall under the influence and politics of a government that may use it to the detriment of Muslims.

The danger of appropriation is too high. The state should not interfere in something as important as the teaching of faith. In addition, the training of imams is already being carried out by the Muslim communities themselves. And the DITIB has also been supporting young Muslims in Germany since 2006 in order to enable them to study theology in Turkey and then become active as imams in Germany.

The conclusion of the fourth DIK is this: diversity is positive when it results in a big ensemble. So far, however, the DIK has led to more profiling and polemics than dialogue and empathy. Whether something constructive can now be achieved in the planned working groups of the DIK remains an open question. Ali Mete the chief editor of IslamiQ and the Managing Director of Plural Publications. He is a member of the editorial staff of Perspektif magazine. 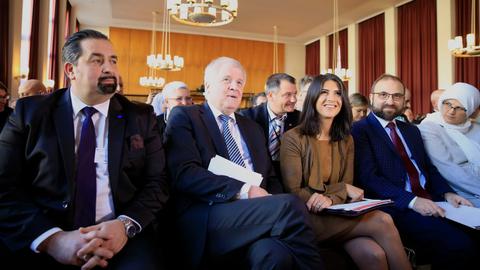