Turkey has been providing military aid to the Tripoli-based government in the Libya conflict, while Egypt, the UAE and Russia have backed warlord Khalifa Haftar.

Turkey has been providing military aid to the UN-recognised Government of National Accord (GNA) in the Libya conflict, while Egypt, the UAE and Russia have backed warlord Khalifa Haftar's militia in the east.

Recent weeks have seen dramatic military advances by the GNA, which drove back Haftar's militia, which had launched an assault on the capital Tripoli last year.

The illegal governing body in the eastern port of Tobruk called this week for Egypt to intervene in the conflict. Sisi met Libyan tribesmen on Thursday and said Egypt would not stand idle in the face of a direct threat to Egyptian and Libyan security.

Asked about the possibility of Egyptian intervention, Erdogan said Turkey would maintain its support for the internationally recognised GNA.

"Steps taken by Egypt here, especially their siding with the putschist Haftar, show they are in an illegal process," he said. He also described the approach of the United Arab Emirates as "piratical."

Egypt warned that it would intervene militarily if forces loyal to the UN-backed government pushed to re-enter Sirte.

READ MORE: Intervening in Libya won't secure Egypt, but will make it 'vulnerable'

"[Upper Karabakh] is under occupation. The Minsk trio has left the issue on the table for 25-30 years," he added.

OSCE Minsk Group – co-chaired by France, Russia and the US – was formed to find a peaceful solution to the conflict, but has yet to get any results.

Twelve Azerbaijani soldiers – including a major general and a colonel – were killed in the clashes that injured four others.

READ MORE: Why Azerbaijanis and Armenians have been fighting for so long 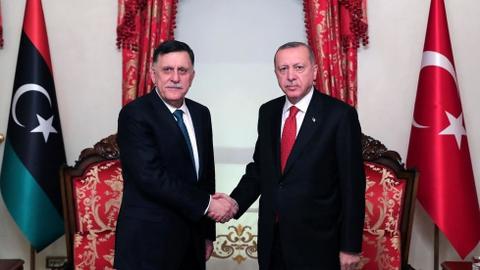