International community must act for safe return of Syrians: Erdogan

Turkey's President Recep Tayyip Erdogan reiterated on Thursday the urgency to create a safe zone inside Syria to house refugees who have been displaced by the bloody civil war.

The international community including the United States, Germany, France and Russia must play their part in coming forward with the funds and support for the plan to materialise at the earliest, he told journalists on sidelines of the UN General Assembly session.

"We want to save these refugees from shelters, and tents," he said.

During the UN meeting, Erdogan had already pressed the international community to act and help reduce the suffering of Syrians affected by the civil war in which hundreds of thousands of people have been killed.

His comments come as the United States said it has evidence the Syrian regime of Bashar Al Assad used chemical weapons including chlorine against the opposition-held areas in May.

Turkey's proposed the safe zone in northern Syria is 480 kilometres long and 30km deep. If all goes according to plan, it can help resettle 1 to 2 million refugees.

Erdogan has proposed housing facilities for the people in the safe zone.

But the reconstruction of such a size requires international assistance, he says. "If this support comes, we can take the burden regarding the construction and complete the work quickly."

On August 7, Turkish and the US military officials agreed to set up a safe zone in northern Syria and develop a peace corridor to facilitate the movement of displaced Syrians who want to return home. They also agreed to establish a joint operations centre but the details of the agreement are yet to be made public.

Turkey has accused the US of dragging its feet and having a different concept for the safe zone.

"Still, as soon as I return [to Turkey], we will implement our plans and figure out which steps we will take following an evaluation process. Because, Turkey is not a country to stall," he said, referring to the country's ongoing lack of trust for the US, as well as the NATO ally's support for YPG terrorists.

The YPG is the Syrian branch of the PKK which is recognised as a terrorist organisation by the US, the EU and Turkey and the group occupies a quarter of Syrian territory.

More than 3.6 million Syrians have fled to Turkey in the last few years with Erdogan saying his government has spent around $40 billion on their welfare.

"Back in 2016, they promised us 6 billion euros for the refugees. They told us that they will pay in two instalments. Yet, they only paid 3 billion euros," he said.

Talking about Israel, Erdogan said the violence of Jewish state against the Palestinians in the occupied territories damages world peace.

“There is no way that Israel contributes to world peace,” he said.

“Unfortunately, it [Israel] kills everyone, including children.”

Erdogan said it has become difficult to argue with the Israelis as they refuse to accept responsibility of human rights abuses even in face of evidence.

Referring to a recent incident in which that Israeli forces killed an unarmed Palestinian woman, he said that he told the incident to the Jewish institutions’ representatives but they didn't believe any of that happened.

“They said there is no such thing. I showed them the video of the shooting immediately and asked: ’If you still can’t see it, what more can I do?’”

Erdogan took the centre stage at the UN session when he displayed a picture of time-lapsed map of Israel during his speech. The map showed how Israel has gobbled Palestinian land over the decades.

“‘Look, you were right there. After this period, Palestine shrank and you have widened. How? With occupation." 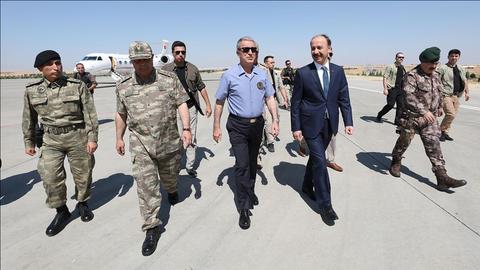