President Erdogan said up to 3 million Syrians in Turkey and Europe can be resettled in northern Syria safe zone if established.

Ankara will initiate its own plans in two weeks if no results come from Turkey-US safe zone deal, the Turkish president said on Wednesday.

President Recep Tayyip Erdogan's remarks came at the opening ceremony for the 2019-2020 academic higher education year at Bestepe National Congress and Culture Center in the capital.

Referring to how an agreement between Turkey and the US on the establishment of a Syrian safe zone could enable displaced Syrians to return, Erdogan, said: "Two or three million Syrian refugees in Turkey and Europe can be resettled in the safe zone east of Euphrates in northern Syria."

Underlining Turkey's expectation for "more concrete support" from European countries on Syria's Idlib and the safe zone east of Euphrates, he said: "Turkey does not need words anymore."

"Turkey is hosting an unprecedented 3.6 million refugees. Then, the West needs to do the same," Erdogan said and added: "Turkey can't shoulder the responsibility of 4 million Syrians if we do not keep peace in Idlib immediately."

On August 7, Turkish and the US military officials agreed to set up a safe zone in northern Syria and develop a peace corridor to facilitate the movement of displaced Syrians who want to return home. They also agreed to establish a joint operations centre.

Turkey has accused the US of dragging its feet and having a different concept for the safe zone. 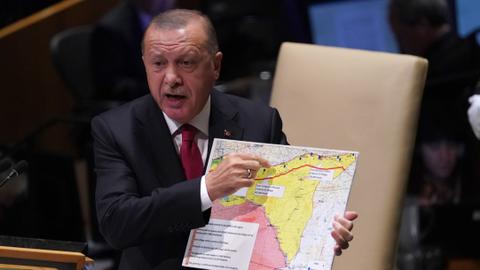