Libya embraces US sanctions on oil smugglers network based in Malta

Libya's National Oil Corporation (NOC) has welcomed the US' decision to impose sanctions on three individuals and Alwefaq Ltd, a Malta-based company allegedly smuggles fuel and drugs from Libya to Malta.

According to a statement released on Thursday, the individuals blacklisted include Faysal al Wadi and two associates, Musbah Mohamad M Wadi and Nourddin Milood M Musbah.

The NOC said the network of smugglers "have contributed significantly to destabilising the country," adding it will continue to monitor all smuggling operations in various regions of Libya.

"[We] will continue to submit reports to the Office of the Attorney General and the Sanctions Committee of the Security Council and follow up legal procedures to hold accountable those involved in these illegal act," said the statement released on NOC's Facebook page.

This comes after NOC accused the United Arab Emirates of instructing eastern illegal militias in Libya's civil war to reimpose a blockade of oil exports after the departure of the first tanker in six months.

Today, the U.S. imposed financial sanctions on a network of smugglers contributing to instability in Libya and depriving the Libyan people of economic resources. We will continue to take concrete actions in response to those who undermine Libya’s peace, security, or stability.

"Faysal al Wadi and his associates have smuggled fuel from Libya and used Libya as a transit zone to smuggle illicit drugs," US Treasury Department's Deputy Secretary Justin G. Muzinich said in a statement.

"Competition for control of smuggling routes, oil facilities, and transport nodes is a key driver of conflict in Libya and deprives the Libyan people of economic resources," the department said.

It added that Wadi’s trafficking operations included smuggling drugs and Libyan fuel into Malta, and transporting Libyan fuel and drugs between Libya's port of Zuwarah and Hurd’s Bank-- just outside Malta’s territorial waters.

The department noted that Hurd’s Bank is a well-known geographic transfer location for illicit maritime transactions.

Libya, with the largest oil reserves in Africa, can produce 1.2 million barrels of crude oil per day. However, production has fallen below 100,000 barrels a day due to interruptions by pro-Haftar militias over the past six months.

Since April 2019, Khalifa Haftar’s illegitimate forces have launched attacks on Tripoli and other parts of northwestern Libya, resulting in thousands of deaths, including women and children.

The Libyan government, recognised by the UN as the country’s legitimate authority, has recently achieved significant victories, pushing Haftar’s forces out of Tripoli and the strategic city of Tarhuna.

The country’s new government was founded in 2015 under a UN-led agreement, but efforts for a long-term political settlement failed due to a military offensive by Haftar, who has been backed by France, Russian paramilitary group Wagner, the UAE, and Egypt. 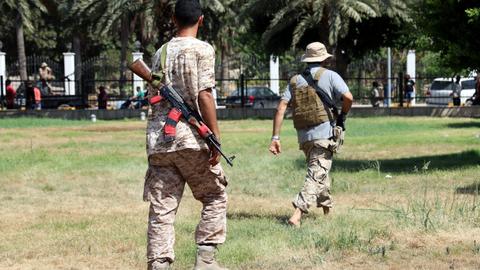