Libyan legislative leaders have quit talks in Geneva on a constitution and elections without reaching a deal, pausing diplomacy to resolve a standoff that has imperilled a two-year peace process.

The UN special adviser on Libya, Stephanie Williams, has said she will recommend alternative ways to move stalled talks in light of continued differences between rival groups.

Williams said on Thursday despite some progress in talks, "disagreement persists on the eligibility requirements for the candidates in the first presidential elections".

Williams made the remarks in a statement following a meeting in Geneva between the presidents of the House of Representatives, Aguila Saleh, and High Council of State, Khaled al-Mishri.

The envoy urged both "to overcome the pending disagreement as soon as possible," and stressed maintaining "calm and stability" in Libya.

"The United Nations' good offices will remain available to provide all support necessary to reach a sound agreement that meets the aspirations of the Libyan people," she said.

Libya has been plagued by turmoil and divisions since the 2011 ouster of strongman Muammar Gaddafi.

UN-sponsored talks were held in Egypt last week to reach a consensus on the constitutional framework to hold long-awaited elections.

Libyans are still waiting for elections to take place in hopes that the vote will contribute to ending years of armed conflict that have plagued the oil-rich country. 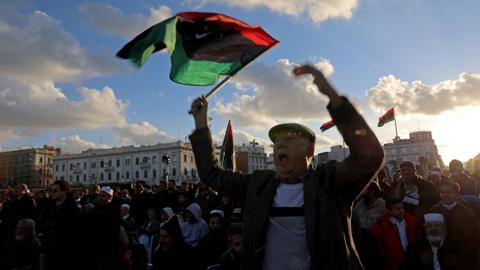