Argentina says that satellite calls detected over the weekend did not come from missing submarine, while storm weather hampers search for the vessel and its 44 crew members.

An Argentinian military submarine reported an electrical problem and was headed back to base when it went missing last week in the South Atlantic, the navy said on Monday, while storms complicated efforts to find the vessel and its 44 crew members.

The vessel departed on Monday from Ushuaia, near the southernmost tip of South America and was heading back to its base, south of Buenos Aires.

The submarine had surfaced and reported an electrical malfunction before it disappeared 432 km (268 miles) off the coast, a naval commander Gabriel Galeazzi told reporters.

"The submarine surfaced and reported a malfunction, which is why its ground command ordered it to return to its naval base at Mar del Plata," he said.

Galeazzi said it is normal for submarines to suffer system malfunctions. "A warship has a lot of backup systems, to allow it to move from one to another when there is a breakdown," he said.

Hopes for a successful search for the ARA San Juan submarine, which went missing last Wednesday off Argentina's coast, waned on Monday when the navy said satellite calls detected over the weekend did not in fact come from the vessel.

Intermittent satellite communications had been detected on Saturday and the navy had said they were likely to have come from the submarine. But the ARA San Juan in fact sent its last signal on Wednesday, navy spokesman Enrique Balbi said.

The calls that were detected "did not correspond to the satellite phone of the submarine San Juan," he said on Monday, adding that the craft had oxygen for seven days. After that, he said, it would have to surface or get near the surface to replenish air supply.

Storms have complicated efforts to find the navy submarine, which had gone missing in the South Atlantic.

Authorities have mainly been scanning the sea from above, as storms have made the search difficult for boats.

US airplanes carrying subsurface search specialists arrived in Argentina to help hunt for the ARA San Juan, which was 432 km (268 miles) off Argentina's coast when its location was last known early on Wednesday, said navy Admiral Gabriel Gonzalez.

More than a dozen boats and aircraft from Argentina, the United States, Britain, Chile and Brazil had joined the effort.

Authorities have been scanning the sea from above as waves of up to 8 metres (26 ft) and winds of up to 40 knots made the search difficult for boats, Gonzalez told reporters.

"Unfortunately these conditions are expected to remain for the next 48 hours," Gonzalez said from the Mar del Plata naval base, where the submarine had been heading toward before vanishing.

The government was working with Iridium Communications Inc to trace the location of the calls.

The US-based company did not immediately respond to a request for comment outside of normal business hours.

A search of 80 percent of the area initially targeted for the operation turned up no sign of the submarine on the ocean's surface, Balbi said, but the crew should have ample supplies of food and oxygen.

The navy said an electrical outage on the diesel-electric-propelled vessel might have downed its communications. Protocol calls for submarines to surface if communication is lost.

Crew members' relatives gathered at the Mar del Plata naval base, waiting for news. They were joined by President Mauricio Macri, who arrived late morning but did not address the media.

"There is no good news," Juan Carlos Mendoza, father of crew member Fernando Mendoza, told reporters. "Hopefully they have oxygen."

The government also sent five psychologists and a psychiatrist to the base in support of the relatives. "The families are holding up well. The word 'hope' is still being used," the psychiatrist Enrique Stein told reporters.

Pope Francis, who was born in Argentina, mentioned the missing vessel in his Sunday noon prayer.

The dramatic search has captivated the nation of 44 million.

The ARA San Juan was inaugurated in 1983, making it the newest of the three submarines in the navy's fleet. Built in Germany, it underwent maintenance in 2008 in Argentina.

That maintenance included the replacement of its four diesel engines and its electric propeller engines, according to specialist publication Jane's Sentinel. 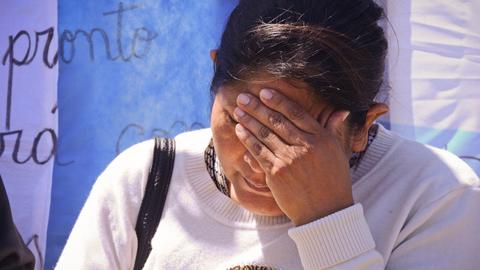 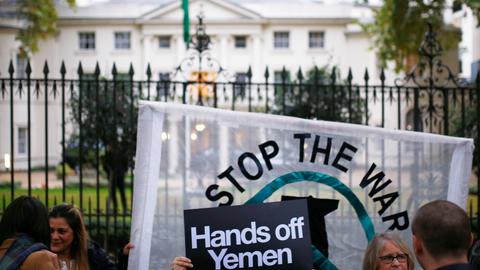