Before elephants, US eased limits on lion trophies - report

A month before the US administration reversed a ban on elephant trophies, it quietly loosened curbs on importation of heads and hides of African lions shot for sport, Associated Press says.

One month before the Trump administration sparked outrage by reversing a ban on trophies from threatened African elephants, federal officials quietly loosened restrictions on the importation of heads and hides of lions shot for sport, the Associated Press news agency reported on Monday.

It said the US Fish and Wildlife Service (USFWS) began issuing permits on October 20 for lions killed in Zimbabwe and Zambia between 2016 and 2018.

The (USFWS) is also currently studying whether to add three additional countries to the list — Mozambique, Namibia and Tanzania, AP said.

Previously, only wild lions killed in South Africa were eligible to be imported.

In a pair of recent tweets, President Donald Trump said he will delay the new policy on allowing elephant trophies, but he made no mention of lions.

Big-game trophy decision will be announced next week but will be very hard pressed to change my mind that this horror show in any way helps conservation of Elephants or any other animal.

Trump, whose adult sons are avid big-game hunters, also expressed skepticism about his own administration's claim that killing threatened animals could help save them by helping raise money for conservation programmes.

Trump weighed in after a strong public backlash against reversing an Obama-era ban on elephant trophies, which became public through a written notification posted in the Federal Register.

Officials said that there was no such legal requirement for notifying the public about the policy change on lions.

In late 2015, the Obama administration added two subspecies of African lion to the list of animals protected under the Endangered Species Act.

Due to poaching and habitat loss, the number of lions living in the wild is in sharp decline — from an estimated 200,000 a century ago to less than 20,000 today.

Palmer paid $54,000 to bow-hunt Cecil on private land just outside the park.

A photo of Donald Trump Jr holding a knife and the bloody severed tail of an elephant he reportedly killed in Zimbabwe in 2011 has also drawn ire from animal rights activists.

Wayne Pacelle, the president and CEO of The Humane Society of the United States, said that he is encouraged that the president is taking a second look at the issue.

"Keeping elephants and lions alive is a key to economic progress in so many African nations," Pacelle said.

Another group, the Center for Biological Diversity and the Natural Resources Defense Council, sued the US government on Monday over the plan to allow hunters to bring home elephant and lion trophies from Zimbabwe.

We are deeply concerned by reports that the Trump administration has resumed importation of sport-hunted lion trophies under the guise of conservation. 70% of the world’s trophy hunters are American; we have an obligation to help. Will you join our fight? https://t.co/emRJnX1Gfm pic.twitter.com/AKkovgHstU

The lawsuit intends to resolve "contradictory announcements" by the Republican administration about trophy imports of the at-risk species.

Africa's elephant population plunged by about a fifth between 2006 and 2015 because of increased poaching for ivory, the International Union for Conservation of Nature said last year.

Wildlife activists argue that corruption is endemic in impoverished Zimbabwe, and that money generated by big game hunting and meant for conservation has been diverted to crooks and poachers. 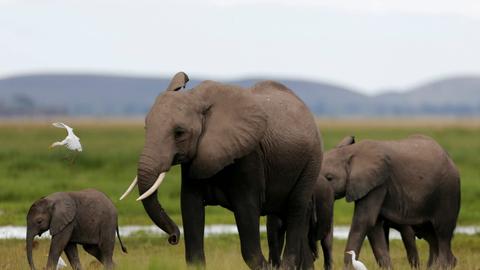 Trump reverses ban on bringing elephant trophies to US from Africa