The announcement comes almost a month after US President Donald Trump fired FBI director James Comey, who was overseeing an investigation into possible links between Russia and Trump's election campaign.

​US President Donald Trump on Wednesday announced in a tweet he would nominate former US assistant attorney general Christopher A Wray to lead the Federal Bureau of Investigation (FBI).

The announcement comes almost a month after Trump, in a controversial move, fired FBI director James Comey, who was overseeing an investigation into possible links between Russian meddling in the 2016 US elections and the Trump campaign.

Comey is scheduled to testify on the investigation before the Senate Intelligence Committee on Thursday.

I will be nominating Christopher A. Wray, a man of impeccable credentials, to be the new Director of the FBI. Details to follow.

Wray, now in private practice, worked from 2003 to 2005 at the Justice Department under former Republican president George W. Bush.

The US Senate must evaluate and vote on any nomination by Trump of a new FBI leader.

The president met last week with candidates for the FBI director post, including Wray, according to White House spokesman Sean Spicer.​

Wray works for King & Spalding's Washington and Atlanta offices, handling white-collar criminal and regulatory enforcement cases, according to the firm.

While there, he represented Chris Christie in the Bridgegate scandal, in which two of the New Jersey governor's aides were convicted.

Christie, who became a close adviser to Trump during the campaign and whose name was floated as a possible Comey replacement, was never charged.

At the Justice Department, Wray worked on corporate fraud scandals and cases involving US financial markets, according to his biography on the law firm's website.

He represented the government in its fraud case against Enron Corp, the collapsed energy company. 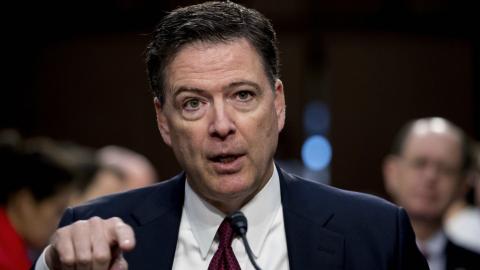