A mudslide triggered by heavy monsoon rain and flooding has killed at least 15 and buried 20 homes of tea plantation workers in southern India.

The tragedy with took place on Friday according to police, has been the focus of rescue efforts saving the lives of twelve, said police officer Eldhose Madhai. About 70 people were reported missing in the region with more than 51 feared to be trapped under soil and debris.

"One team of National Disaster Relief Force have reached the site.
Helicopters cannot be deployed as the climate is very misty," he added.

Nearly 20 cm of rain fell on Thursday in Idukki district, according to data compiled by state-run weather department. Idukki is about 240 km north of the state capital Thiruvananthapuram.

"Now the search for 57 is going on,” the official, who spoke on the condition of anonymity as he was not authorised to speak to the media, told Anadolu Agency.

Communication links and electricity lines were snapped and a bridge in the area was washed away.

The heavy rains are not specific to India, as all of South East Asia has been facing heavier than normal rains.

Kerala state's top elected official, Pinarayi Vijayan, tweeted that teams from the National Disaster Response Force were on their way to Idukki district's Rajamalai area, where the mudslide occurred.

The landslide in the Rajamalai village of hilly Munnar area in idukki district on Friday morning was cased by heavy monsoon rains, as the officials warned for past several days about flood-like situation in the area.

A 50 member strong special task force team of the Fire Force has been dispatched to Rajamalai in Idukki for rescue efforts. They have been equipped for nighttime rescue activities. #KeralaRains pic.twitter.com/olo1eraMNV

The local authorities have dispatched an additional 50-member special task force team to the area to support search and rescue operations.

“They have been equipped for night-time rescue activities," said Kerala Chief Minister Vijayan on Twitter.

Several areas of the country are witnessing floods due to the yearly monsoon rains, with flooding and landslides a common occurrence during the season.

The Press Trust of India news agency said police and fire service officers were in the area.

Communication links and electricity lines were snapped and a bridge in the area was washed away.

The meteorological office issued a red alert with more rain expected in the region.

A Hindu temple in Ernakulam district on the bank of the Periyar River was almost submerged as water levels rose after sluice gates of a dam were opened.

Annual monsoon rains hit South Asian from June to September. The rains are crucial for rain-fed crops planted during the season but often cause extensive damage.

More than 550 people have died in India, Bangladesh and Nepal and over 9.6 million people have been displaced across South Asia since the flooding began in June, according to the International Federation of Red Cross and Red Crescent Societies. 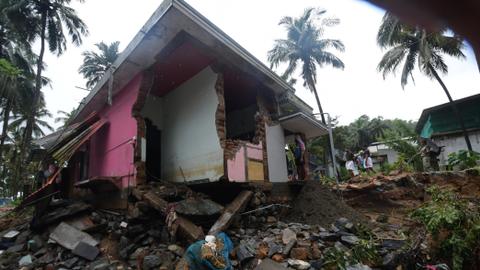