Edward Leung, 27, was convicted in May of rioting over the 2016 running battles with police, when demonstrators hurled bricks torn up from pavements and set rubbish alight.

Hong Kong's leading independence activist was jailed for six years on Monday for his involvement in some of the city's worst protest violence for decades.

Edward Leung was convicted in May of rioting over the 2016 running battles with police, when demonstrators hurled bricks torn up from pavements and set rubbish alight in the commercial district of Mong Kok.

Handing down his jail term, Judge Anthea Pang said Leung actively participated in the riots and described his actions as "wanton and vicious."

The 27-year-old was already in custody after pleading guilty in January to a separate charge of assaulting a police officer during the 2016 clashes, and being sentenced to one year in jail.

Pang said the court would not admit political reasons as a mitigating factor, adding that punishment must have a "deterrent" effect.

Leung, who was present in court, looked calm throughout the hearing and waved at supporters – some of whom reacted emotionally to the sentence – before being led away.

Two other protesters were sentenced alongside Leung to seven years and three and a half years in prison.

At least 16 people have already been jailed over the clashes, with terms of up to four years and nine months for a man convicted of rioting and arson. Unlike Leung, none were known activists.

The 2016 protest began as a seemingly innocuous rally to protect illegal hawkers from health inspectors but it quickly morphed into an outpouring of anger against authorities in Hong Kong and Beijing.

Police fired warning shots in the air as the unrest worsened and scores of people including officers were injured, with dozens arrested.

It was later dubbed the "Fishball Revolution" after one of the city's best-loved street snacks. 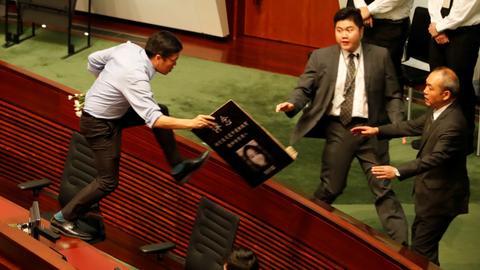