Hong Kong leader Carrie Lam said on Tuesday that Beijing's proposed national security laws would not trample on the city's rights and freedoms and called on its citizens to wait to see the details of the legislation.

"There is no need for us to worry," Lam told a regular weekly news conference, but she did not explain how the freedoms that Hong Kong enjoys will be upheld.

"In the last 23 years, whenever people worried about the Hong Kong's freedom of speech and freedom of expression and protest, time and again, Hong Kong has proven that we uphold and preserve those values," she said.

"The best thing is to see the legislation in front of us and to understand why at this point in time Hong Kong needs this piece of legislation."

Beijing unveiled plans last week for national security legislation for Hong Kong that aims to tackle secession, subversion and terrorist activities. It could see Chinese intelligence agencies set up bases in the city.

Thousands poured onto the street of Hong Kong on Sunday in a mass protest against the planned new security laws. Police fired tear gas and water cannons to disperse the crowd and arrested almost 200 people.

It was the first major protest since anti-Beijing demonstrations rocked Hong Kong last year over an unsuccessful plan to introduce an extradition law with China. The unrest plunged the former British colony into its worst crisis since its return to Chinese rule in 1997.

More protests are expected in Hong Kong on Wednesday.

Chen Daoxiang told Chinese state television the garrison had the determination and ability to safeguard China's national sovereignty and the long-term prosperity and security of the city.

China's military has remained in barracks in Hong Kong throughout the past year, leaving police to confront anti-Beijing protesters.

Xie Feng, commissioner of China's Ministry of Foreign Affairs in Hong Kong, made his remarks during a speech on proposed national security legislation in Hong Kong, in which he sought to reassure foreign investors they would not be affected.

Xie said the law tackled secession, subversion, foreign interference and terrorism and would only affect a small number of residents, while for the rest "there was absolutely no need to panic".

"The legislation will alleviate the grave concerns among local and foreign business communities about the violent and terrorist forces," Xie said.

His comments added to a chorus of strengthening government rhetoric against protesters in the Chinese-ruled city, where security officials cited cases involving explosives "commonly used in terrorist attacks overseas" as a growing concern.

Some people fear it would limit rights and freedoms guaranteed under a "one country, two systems" agreement made with Britain on Hong Kong's 1997 return to Chinese rule.

But Xie said the legislation would, in fact, strengthened it and rights would be preserved.

"Do not be intimidated or misled, exploited by those with ulterior motives and in particular, do not be a rumour monger yourself, or join the anti-China forces in stigmatizing or demonizing the legislation," he said, addressing "law-abiding citizens and foreign internationals who love Hong Kong". 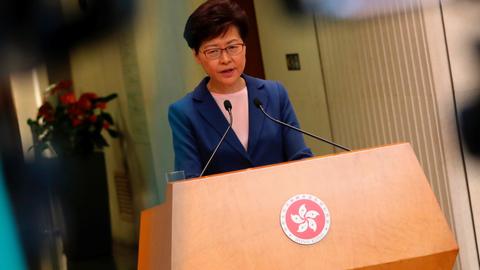 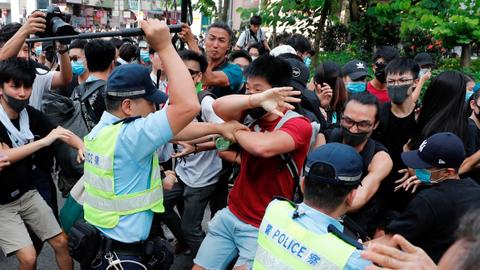