Council on American-Islamic Relations demands resignation of defence chief Lloyd Austin and "any military officials who had a direct role in approving the drone strike that killed 10 civilians" in August 2021.

Any Pentagon official directly involved in a botched air strike in Afghanistan last year should resign, including US Defense Secretary Lloyd Austin, a Muslim-American advocacy group has demanded.

The US-based Muslim body Council on American-Islamic Relations (CAIR) also called for the resignation of "any military officials who had a direct role in approving the drone strike that killed 10 civilians" in August.

"This attack was not simply an honest mistake or a rare occurrence; it was the latest in a long line of reckless drone strikes that have killed innocent people at homes, weddings and funerals in Afghanistan, Pakistan, Yemen, and elsewhere," said Mitchell.

Pentagon releases video footage of US drone strike in Kabul that killed 10 civilians in August in the final days of America's troop withdrawal pic.twitter.com/S9HjMyMF9p

The demand came a day after the Pentagon released a video of the attack.

The New York Times obtained the footage through a Freedom of Information Act lawsuit against US Central Command, which then posted the imagery to its website on Thursday.

It marks the first public release of video footage of the August 29 strike, which the Pentagon initially defended but later called a tragic mistake.

The videos include about 25 minutes of footage from what the Times reported were two MQ-9 Reaper drones.

The footage shows the scene of the strike prior to, during and after a missile struck a civilian car in a courtyard on a residential street.

Indistinct images show individuals moving in or near the attack zone.

9 killed by U.S rocket attack today in Kabul, who are they?

"Any Pentagon leaders who played a direct role in approving the horrific massacre of these innocent people – including seven children – should take responsibility by stepping down. If secretary Austin was directly involved in approving the strike, he should resign," Mitchell added.

The US Defense Department has ruled out any punishment to US soldiers involved in the drone strike, which triggered global condemnation.

The August 29 drone attack was one of the last strikes when the US military was still in the war-torn country before it pulled out along with all foreign forces in August. 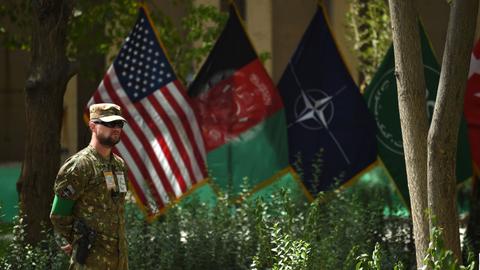