The son of former tennis star Boris Becker has pressed charges against a German nationalist lawmaker who insulted him with a racist slur, his lawyer said Thursday.

The tweet emerged after an article in a German magazine in which Noah, 23, said Berlin was a "white city" compared with London or Paris, and that he'd been attacked there because of his skin color.

Noah Becker is the son of three-time Wimbledon champion and his ex-wife Barbara Becker, who has a German mother and an African-American father.

He works as an artist and musician and lives in Berlin.

In the interview with emotion magazine, which first published excerpts on Tuesday, Noah Becker was asked if he has experienced racism in Berlin.

"Yes, I have also been attacked because of my brown skin color," he said. "In comparison to London or Paris, Berlin is a white city."

Maier, a member of the Alternative for Germany (AFD) party, reacted Tuesday by posting a racist slur on Twitter that he later deleted.

The lawmaker later denied writing the controversial Tweet himself. He said one of his employees had written the tweet, the German news agency DPA reported.

Last year Maier, a judge from the eastern German state of Saxony, was reprimanded by a court in Dresden for using far-right slogans, according to DPA.

Maier is one of 92 members of the nationalist AfD party which was elected to Germany's national parliament for the first time in September.

Earlier this week, another prominent member of the AfD ran into trouble with police and Twitter over her response to a Cologne police tweet offering New Year greetings in Arabic.

Lawmaker Beatrix von Storch tweeted her objections to the police tweet, saying, "Do they think they will calm the barbaric, Muslim, group-raping hordes of men this way?"

Von Storch's Twitter account was blocked for several hours Monday over a suspected breach of rules on hate speech.

Police said Tuesday they filed a criminal complaint to prosecutors over suspected incitement.

New Year celebrations in Cologne were overshadowed two years ago when hundreds of women complained of being groped and robbed, mostly by groups of migrants.

The AfD is known for its aggressive stance against Muslims and migrants. 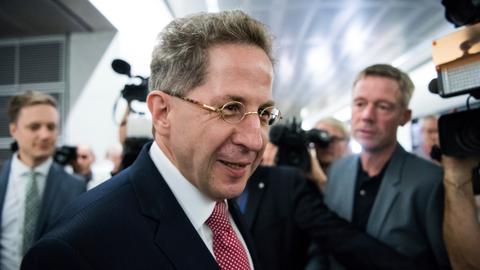