Why India’s internet ban in Kashmir is called ‘digital apartheid’

A rights group in Indian-administered Kashmir has published a report highlighting the consequences of a punitive communications blackout imposed by New Delhi in the disputed region, stating that “the ongoing internet siege enacts a digital apartheid, a form of systemic and pervasive discriminatory treatment and collective punishment.”

Based on field work, government documents, court files and media reports undertaken by the Jammu-Kashmir Coalition of Civil Society (JKCCS), the 125-page report titled ‘Kashmir’s Internet Siege’ examines the economic, political, and social costs associated with the internet shut down since New Delhi abrogated Article 370 of the Indian Constitution that had conferred semi-autonomy to the state of Jammu and Kashmir and bifurcated it on August 5, 2019.

Indian officials claimed that the clampdown was aimed at preventing anti-India protests and attacks by rebels following the revocation of the state’s special status.

“Digital sieges are a technique of political repression in Kashmir, and a severe impediment to the enjoyment of internationally and constitutionally guaranteed civil, political and socio-economic rights,” the report said.

It added that the move worked to curtail circulation of news and information, restrict social and emergency communications, and silence and criminalise all forms of political interactions and mobilisations as “military related,” “terrorist activity” and “threats to national security”.

Coupled with the lockdown arising from the Covid-19 pandemic, the situation was made even more intolerable.

“Currently 12.5 million people in the region can barely video call their friends or family, attend online classes, webinars or conferences, use apps to have their groceries or medicines delivered, entertain themselves by streaming a film, or download the World Health Organization (WHO) recommendations and health guidelines.”

The report was also addressed to the international community.

India leads the world in internet shutdowns, of which Jammu and Kashmir accounts for more than two-thirds in both frequency and duration. The blackout was described as the longest running internet shutdown in a democracy, and the second longest in the world after Myanmar.

There have been 226 documented internet shutdowns in the state since 2012, and 70 separate shutdowns in 2020 alone.

According to technology researcher Prateek Waghre, disrupted internet access for 12.5 million Kashmiris is estimated at a loss of around 3.5 billion hours (and counting).

Although some of the communication restrictions have been lifted and internet has been restored over fixed lines, mobile internet speeds in most of the region remain terribly slow and 18 out of 20 districts continue to be deprived of high-speed 4G internet.

For the moment, mobile internet bandwidth is officially throttled to 2G levels, which does not allow for full functionality for most websites and web-based applications.

The impact of the longest ever digital lockdown in the region’s turbulent history has been severely felt in spheres from education to health to media freedoms.

The Kashmir Chamber of Commerce and Industries pegged the economic losses in the region at $5.3 billion and job losses at half a million since August last year.

Amid the backdrop of transformations of land ownership and citizenship laws against which the internet shutdown was occurring, fears of a resource grab were highlighted when e-auctions to Jammu and Kashmir mines were held, and businesses across the country were invited to submit tenders online. With no internet in Kashmir, local businesses were at an immediate disadvantage.

The report further said that health indices showed a marked decline during the service blackouts, as critically ill patients were not able to access government healthcare or seek insurance online. Some hospital visitations dropped as much as 38 percent in 2019.

Education also suffered a major setback, as schools in Kashmir have remained closed since last August, reopening for just a fortnight before the pandemic hit and lockdown commenced. 2G internet speeds have stifled online learning from taking place for students enrolled in Kashmir’s 30,000 schools and 400 institutes of higher education.

Press freedoms and free speech has suffered from the chilling effects of online surveillance, profiling and criminal sanctions, with police complaints registered against working journalists and over 200 social media and VPN users, the report said.

The report discusses the Indian Supreme Court’s constitutional judgment in Anuradha Bhasin v. Union of India: while the ruling did not declare internet shutdown and restrictions in Kashmir as unconstitutional, it found that indefinite and blanket shutdowns were impermissible and subject to administrative and judicial review.

By not ending the digital siege, what was inaugurated instead was “a new legalized regime of mass surveillance, filtering, and internet-speed throttling through expansive executive orders,” the report says.

Such orders are issued every two weeks, and a total of 17 such extension orders have been issued since January.

India’s institutional framework plays a major part in allowing local officials to assume broad discretion to order shutdowns, which were implemented more than 100 times in 2019 and cost the Indian economy an estimated $1.3 billion.

The Indian central government also assumes regulatory power over the internet from the Indian Telegraph Act, 1885, which originally gave British colonial officials authority over telegraph lines in India, and provided the basis for Temporary Suspension of Telecom Services Rules in 2017 that formalised the way officials could issue orders for internet shutdowns. 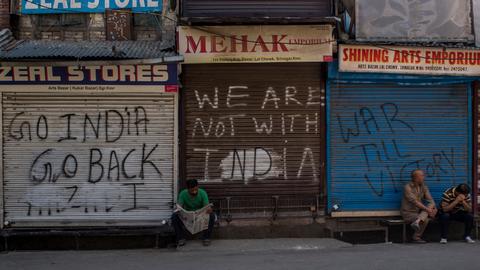