Why the 2020 election is the Boomers' last stand

Millennials and Generation Z will soon become the dominant voting bloc, which would bestow the Democratic Party with a demographic advantage for years to come.

The US is at a demographic tipping point – a historic moment with massive implications for not only how Americans see themselves, but for future elections to come.

Those political ramifications will heavily favour the Democratic Party as the Republican Party, led by President Donald Trump, suffers from a rapidly eroding position with younger voters at precisely the time as diverse Millennials and Generation Z voters are poised to become the largest voting bloc in the electorate.

According to new study conducted by the nonpartisan States of Change project, in 2020, for the first time, Millennials (young adults born between 1981 and 1996) and Gen Z+ (born after 1997) will equal Baby Boomers and prior generations (older adults born in 1964 or earlier) as a share of all Americans eligible to vote.

Since older voters typically turn out at higher rates than their younger counterparts, the study forecasts that earlier generations will still cast more ballots in the 2020 election, by a margin of 43 percent to 32 percent.

But in 2024, the two younger generations are expected to equal older voters as a share of actual voters. And by 2028, Millennials and Gen Z will eclipse Boomers and Gen X as a share of both eligible and actual voters – both nationally and in every crucial battleground state.

That ominous prospect presents a near and long-term danger to the GOP and its traditional resistance to racial and cultural change.

At the moment, polls both nationally and in key swing states show Joe Biden positioned to considerably expand on Hillary Clinton’s margin among younger voters, as many more signal their intention to vote than did in 2016.

As the electorate begins the most profound generational transition since the early 1980s, when Boomers became the largest voting bloc over the Silent Generation, it appears likely to spell disaster for Republicans and bestow Democrats with a sizable demographic advantage to last a generation.

Another study by the Pew Research Center concluded that “similar to Millennials, Gen Zers are progressive and pro-government, most see the country’s growing racial and ethnic diversity as a good thing, and they’re less likely than older generations to see the United States as superior to other nations.”

Pew also found that the percentage of non-Hispanic white voters had declined in all 50 states since 2000, a significant metric since all major voter groups except whites are slanted toward the Democrat camp.

Ultimately, a whooping 75 percent of net growth in the electorate since 2000 has been from non-white voters. As the ‘browning’ of the pool of eligible voters continues apace, the formula of relying on a foundation of mainly white voters to win national elections will diminish.

Shifts in America’s demographic makeup have been increasingly evident over the past two decades but represented a watershed moment following the 2012 re-election of Barack Obama.

2013 was the first year that the majority of infants under the age of one were not white, and white deaths outnumber white births in 2016.

By 2045, the census bureau projects that the nation will become “minority white”.

Going into this election, Gen Z are even more racially diverse than Millennials – 49 percent are people of colour versus 45 percent of Millennials. By contrast, more than 70 percent of Boomers are white.

David Wasserman, an analyst at the Cook Political Report, published an article last month arguing that demographic shifts since 2016 alone may doom Trump’s re-election bid, noting that white, college-educated voters have grown as a percentage of the electorate, while so-called “non-college whites” – a large portion of Trump’s base – have declined.

If turnout in 2020 is similar to 2016, then Trump would both lose the popular vote by twice the margin he did last time as well as drop the electoral votes of four more states, simply due to a demographic shift that has seen Trump’s base shrink in terms of vote share over the past four years.

Since the mid-1980s, women have voted at higher rates than men, and the partisan divide is rapidly expanding among female voters since the election of Trump. Pew reports that 56 percent of women identify as Democrats and only 38 percent as Republicans in 2019; for men it was 50 percent versus 42 percent.

All this suggests that the 2020 election may be the last in which a candidate can hope to win by targeting older, white, conservative voters. By the next election cycle, those voters will become a marginal political force and victory is unlikely without building a much wider coalition.

The combination of all these trends undoubtedly bode well – or at least should – for the Democratic Party.

The attitudes expressed by younger generations of more left-leaning voters on issues like climate change, healthcare, minimum wage and minority rights mean that the Democrats will benefit as the only available political infrastructure to amplify those policies.

But while this demographic bulge presents bountiful electoral fruit for Democrats, it also creates complications; for if Democrats are winning over more progressive younger people, the party will have to endure an early period of disruption. And it could be a formula for tension between younger voters sympathetic to more radical progressive proposals and a party leadership that stubbornly retains its neoliberal bonafides.

The intra-party divergence that ensued during this year’s Democratic Primaries between young voters (cutting across race and gender) that overwhelmingly supported the upstart self-described Democratic Socialist Bernie Sanders and the centrist DNC establishment that backed Biden, was a preview of the terrain for that coming struggle.

And if Democrats fail to address the financial precarity of Millennials and Gen Zers and advance their economic interests while in power, it can leave the door open for the GOP.

A party that nominated Barry Goldwater in 1964 on a platform of opposing the civil rights movement, the Republicans have continued to remain at best neglectful and at worst antagonistic to minority voters.

In the absence of expanding their base of voters over the past two decades, Republicans came to the realisation that they needed low turnout to win and Republican-controlled state legislatures began enacting rules to suppress voting.

Trump’s 2016 campaign benefited from these efforts, as African-American turnout declined for the first time in 20 years.

However, as Washington Post columnist and former speechwriter for George W. Bush, Michael Gerson recently highlighted, the pace of America’s demographic shift is likely to compel reform within the party.

If it doesn’t, Republicans will cede political hegemony to the Democrats, who are positioned to cement a generational advantage unseen since Franklin Roosevelt built the New Deal following the Great Depression nearly a century ago. 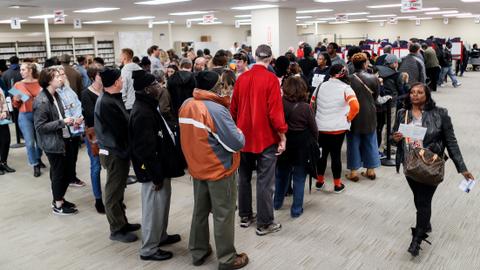